Iowa Point, Kansas, an old town in Doniphan County, was located on the Missouri River and the Chicago, Burlington & Quincy Railroad in Iowa Township. It is an extinct town today. 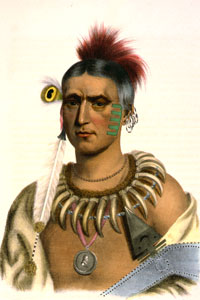 When Kansas Territory was opened in 1854, the Ioway Indians were in possession of the greater part of northern Doniphan County. Shortly after the passage of the Kansas-Nebraska Act, a treaty was made between the Government and the Indians, by which the latter sold a large share of their lands and accepted a diminished reserve that they still occupy. The land thus released to the Government was known as the “Iowa Trust Lands” and was, except for 480 acres, sold to the highest bidder. This reserved section consisted of 320 acres at Wolf Grove, given to J. B. Roy, the United States interpreter, and 160 acres donated to the pioneer missionary, S. M. Irvin, who had the privilege of locating his tract at any point in the reserve. He chose the land upon which Iowa Point was built.

Early in 1855, H. W. Forman, J. W. Forman, and J. S. Pemberton bought a half section of J. B. Roy and traded it with S. M. Irvin for his land at the Point. They then laid out the town and began to erect buildings. The two first buildings were used as dwellings. The first general merchandise store was operated by Beeler & Williams and another was run by Stout and Richard Leach. A hotel was opened by B. Beeler. The post office opened on March 15, 1855.

In 1856, a drug store was opened by Leigh & Brown; a meat market by Burkhalter & Hobbs, and Dr. J. Leigh began to practice of medicine. Improvements begun the previous year were completed in 1856. Among them the sawmill of Forman & Pemberton and a grist mill.

In 1857 the Iowa Point mills were built by the same parties, the first church was erected, a hotel was built for $10,000, the Smithton Masonic Lodge moved to the town and the first lodge of Good Templars in the State was organized. The same year, the first church was built by the Presbyterians. About the same time, the Methodists began to hold services in a public hall used by the Masonic fraternity, and the Baptists held services in the Presbyterian Church.

The town was southern in its sympathies, and the only slave ever offered for sale was sold at auction in the street in 1857.

In 1858, Iowa Point out-stripped Atchison in size and was the second most populated city in Kansas . It led its rival Leavenworth from a business point of view.  Several wholesale houses were in operation, and their sales extended to points more than 100 miles away. This year a ferry company was organized, with H. Forman as president, and a steam ferry boat was put in operation on the Missouri River. The town continued to build up rapidly, a brick yard was started by Joseph Selecman, and this material was substituted for wood in almost all buildings erected from that time on.

In 1861, on the breaking out of the Civil War, Iowa Point citizens organized a company of militia, under Captain C. J. Beeler, which took part in the troubles of the next four years\. In 1862 a company of the Eighth Kansas was stationed at Iowa Point for some time in anticipation of an attack from the Missouri shore. No engagement, however, took place. 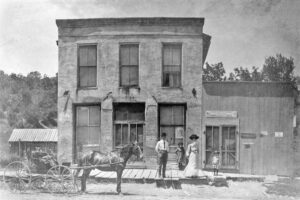 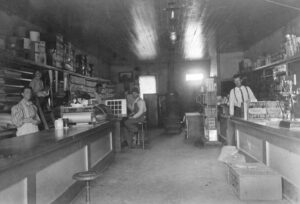 With more towns established further from the river and the eruption of the Civil War, business stood still and then began to decline.

In 1862 a great fire destroyed the main part of the town, the ferry boat sunk, and the newspapers were suspended. The town never recovered from the effects of these disasters. 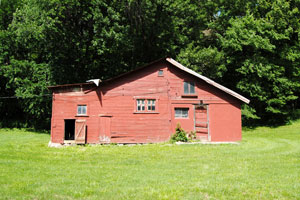 After the war, few of its former residents returned to Iowa Point, and new towns farther west attracted the attention of immigrants leaving the town stagnated.

By the early 1880s, its fine brick buildings were empty, but it still had a large flouring mill and several dwellings.

In 1910, Iowa Point had express and telegraph offices, a money order office, and a population of 150.

Today there are only a few scattered buildings in the area. It is located 14 miles northwest of Troy, Kansas. 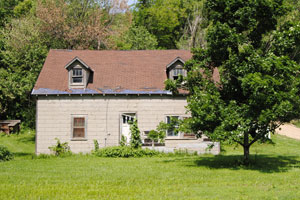 An old house in Iowa Point, Kansas by Kathy Alexander.