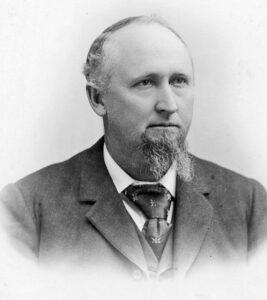 John Whitnah Leedy was born in Richland County, Ohio on March 8, 1849. His parents were members of the Dunkard Church, and his early years were passed under the strict discipline of that religious faith. While still a boy, he was required to go to work when his father died and he began his career as a farmhand. In 1864, when he was 15, he tried to enlist in a military company that was forming in his native county but owing to his youth and the protests of his mother he was rejected. He followed the company to the front, however, and remained with it until the close of the war.

In 1865 he went to Pierceton, Indiana, where he was employed as a clerk in a store for about three years. At the end of that time, preferring outdoor life, he went to Macoupin County, Illinois, and found employment on a farm near Carlinville. He remained there until 1880 when he moved to Kansas and engaged in farming near Le Roy in Coffey County. Somewhere along the line, he married Sarah J. Boyd of Fredericktown, Ohio and the couple would have three children.

Leedy was reared in a firm belief in the tenets of the Republican Party, with which he was affiliated until 1875 when he became a Democrat. When the Populist Party was organized in 1890, he again changed his party allegiance, and soon came to be recognized as one of the Populist leaders in Kansas. In 1892 he was elected to the Kansas State Senate, where he served until elected governor of the state in 1896. At the close of his two years term as governor, he became interested in mining operations in the vicinity of Galena, Kansas.

In 1901 he went to Valdez, Alaska, where he served two years as mayor. Later, he moved to White Court, Alberta, Canada. He became a naturalized citizen of Canada and died there almost penniless. The Kansas Legislature donated $1000 to mark his grave and pay his funeral expenses.