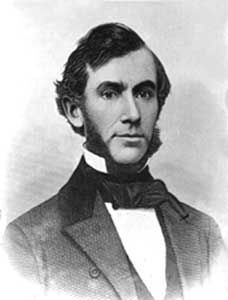 John Pettit was a lawyer, jurist, and politician who served in the court systems of Indiana and Kansas.

John Pettit was born at Sacketts Harbor, New York on June 24, 1807. He received a liberal education, studied law, and soon after his admission to the bar, moved to Lafayette, Indiana, where he began to practice. He served two terms in the lower house of the Indiana Legislature; was a member of the State Constitutional Convention of 1850; was a presidential elector on the Democratic ticket in 1852, and upon the death of James Whitcomb, was appointed United States Senator to fill the vacancy, taking his seat on January 18, 1853.

While in the senate he supported the Kansas-Nebraska Bill, arguing in favor of expanding slavery to Kansas and in a speech said that Thomas Jefferson’s declaration that all men are born free “is nothing more to me than a self-evident lie.”

His conduct as a senator was such that Thomas H. Benton wrote to the Lafayette American: “Your senator is a great liar and a dirty dog, falsifying public history for a criminal purpose.”

In March 1859, he was appointed as the Chief Justice of Kansas Territory, replacing Samuel D. Lecompte and served in that office until the state was admitted into the Union in 1861.

He then returned to Indiana where he served as a judge of the Indiana Supreme Court from 1870 to 1877. He died at his home in Indiana on June 17, 1877, and was interred in Greenbush Cemetery