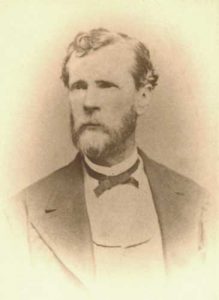 John H. Stringfellow was an early physician of Kansas, one of the founders of Atchison, a pro-slavery advocate, and Speaker of the House in the First Territorial Legislature.

John was born in Culpeper County, Virginia, on November 14, 1819. He was educated at Caroline Academy in Virginia, Columbia University in Washington, D. C., and graduated in the medical department of the University of Pennsylvania in 1845. Soon after that, he moved to Carrolton, Missouri, where he married Ophelia J. Simmons, niece of Governor Edwards.

During the cholera epidemic of 1849, when every boat coming on the Missouri River unloaded cholera patients at Hill’s Landing, he converted a large warehouse into a hospital. He devoted three months to caring for them. In 1852, he moved to Platte City, Missouri. Upon the organization of Kansas Territory, he crossed the river, selected a claim, and in connection with some friends, formed a town company that laid out the town of Atchison. In 1854, he brought his family and lived in Atchison until 1858. He was the founder and editor of the Squatter Sovereign, the first newspaper in Atchison. He was commissioned as a colonel in the Third Regiment of the Territorial Militia by Governor Wilson Shannon.

He was called to Virginia by his father’s death in 1858 and was detained there until after the opening of the Civil War. He entered the Confederate service as a captain of a Virginia company but was at once detailed as a surgeon and acted in that capacity only.