Kackley, Kansas, is a ghost town in northwest Republic County.

The town got its start in 1887 when the Atchison, Topeka & Santa Fe Railroad built a branch line from Neva, Kansas, near Strong City, through Kackley to Superior, Nebraska. The settlement was located in Beaver Township and named for Joe Kackley, who provided land to the railroad station if it would bear his name. 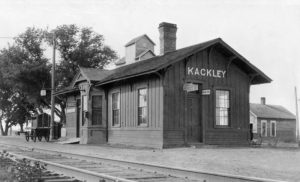 A post office opened on December 8, 1888, and a general store was built the following year. By the early 1900s, Kackley had become a trade center for the area and had three grocery stores, a barbershop, a butcher shop, two grain elevators, a bank, a lumberyard, a blacksmith, and a livery barn, a hotel called the Modern Woodman Lodge, and several saloons, even though Kansas was a Prohibition state at the time. It also boasted two churches – Baptist and Pentecostal. The Baptist Church was used as a school.

The first official school in Kackley was of frame construction, located in the north part of the town. It began as a one-room school, but later, in 1917-18, it was converted to two rooms to accommodate elementary grades and first-year high school.

In 1910, the town had a population of 250 and remained an important grain market stop on the Atchison, Topeka & Santa Fe Railroad. At that time, it had a money order post office, express and telegraph offices, a bank, several business establishments, good schools, and churches of several different denominations.

However, in the subsequent years, the town declined. The Pentecostal church became a dwelling, and the businesses closed. Its post office shut its doors on July 12, 1968, and by 2007, it was called home to only 13 people. 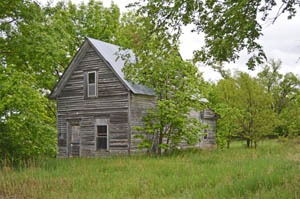 An old abandoned home in Kackley, Kansas, by Kathy Alexander.

Today, Kackley still maintains a couple of grain silos and its railroad tracks, but its businesses are gone. There are still a few residents in the area.

The old town is located about 20 miles southwest of Belleville on Kansas Highway 148.

©Kathy Alexander/Legends of Kansas, May 2021.