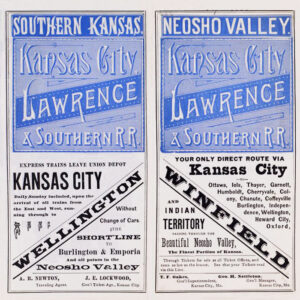 In 1858 a group of Lawrence, Kansas, businessmen supported the idea of a railroad route to the Gulf of Mexico. The Leavenworth, Lawrence & Fort Gibson Railroad Company was chartered by a Kansas Territorial Legislature Act on February 12, 1858, to connect Lawrence with the Neosho River to the south. However, the Civil War delayed their plans.

The charter was amended by another act of the State Legislative and approved on February 29, 1864, giving the company authorization to build a railroad from Leavenworth to the southern border of Kansas.

Senator James Lane was the first president of the Leavenworth, Lawrence & Fort Gibson Railroad. In 1865, he promoted the line to communities along the route to vote for construction bonds. However, construction on the line did not begin until after its name was changed to the Leavenworth, Lawrence & Galveston Railroad on February 24, 1866. The management changed with Senator Lane’s suicide on July 11, 1866.

By the end of 1867, the Leavenworth, Lawrence & Galveston Railroad was able to complete its line between Lawrence and Ottawa, although regular service did not begin until early January 1868. However, the company struggled to find financial support and strong leadership. Under the direction of James Joy, the railroad was completed to the Kansas state line at Coffeyville via Humboldt, a distance of 144 miles, on September 3, 1871. 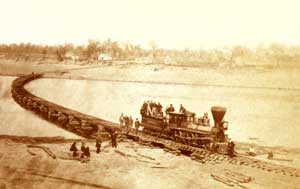 The quickly growing Atchison, Topeka & Santa Fe Railroad took control of the stock in November of 1880 but ran it under the name of the Kansas City, Lawrence, and Southern Railroad Company.

In 1888, the Division Headquarters of the Kansas City, Lawrence, and Southern Kansas Railway Depot was built in Ottawa, Kansas. The depot was given to the Franklin County Historical Society in 1962 when the Santa Fe Railroad moved into a new depot. The museum opened to the public on July 4, 1963. It is located at 135 West Tecumseh Street in Ottowa.

A section of the original route between Lawrence and Baldwin City (known then as the Lawrence District) was abandoned in 1963. The remainder between Baldwin City, Kansas, and Tulsa, Oklahoma, survived under Santa Fe ownership until 1990 when the railroad elected to sell much of the corridor. Most of the route was preserved and purchased by various entities to maintain rail service and is still in operation today. 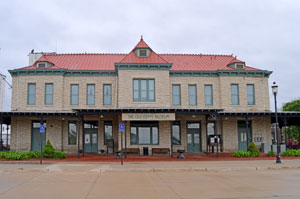