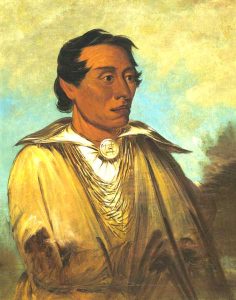 Kennekuk, Kansas, an extinct town today, was initially established in what was, at that time, Brown County.

It was one of the first places in the county where whites located permanently when a Methodist Episcopal Church Mission was established in 1833 among the Kickapoo tribe.

The first white man to locate permanently and erect a home was a Frenchman named Paschal Pensoneau, who married a Kickapoo Indian and settled on the banks of Stranger Creek in 1839. The village was named for Kickapoo Chief and prophet Kennekuk, who moved with his tribe to present-day Kansas in 1832.

In 1844, Captain Wharton established the Old Fort Laramie Road through the area.

By a treaty of 1854, the Kickapoo reservation was diminished, and the tribe was assigned to lands along the Delaware River. In 1856, Major Royal Baldwin was appointed as the Indian agent by the United States Government and sent to northeast Kansas to move the four tribes, the Kickapoo, Sauk, Fox, and Potawatomi, to their Kansas reservations. As an Indian agent, he built a mission for the Indians and accumulated several hundred acres of land.

Another early resident was T. O. Plummer, who moved to the area in 1855 and was the first white settler on Brush Creek on the Kickapoo Indian reservation lands and did his trading at old Kennekuk. The old Mormon Trail passed by his home, and Plummer told a story of a large party of Mormon immigrants being stricken with cholera, and over 100 of them died. Plummer was on excellent terms with the Indians of the neighborhood, and several of them worked for him at different times.

Later, the Kickapoo lands were again diminished, and they were given their present reservation within the confines of Brown County. Afterward, the area was opened to settlement, and the village gained a post office in June 1857.

In 1858, the Overland Stage made Kennekuk the first “home” station out from Atchison, and the drivers were changed there before continuing along the path to San Francisco, California.

At that time, a man named Thomas Perry ran an eating house there that quickly became known to travelers as one of the best on the route. Mrs. Perry, a grand cook, always had a smoking hot dinner ready with the best of coffee for the occupants of the stagecoaches. In the early days’ dances were held in the Perry home, and the Honorable Daniel W. Wilder, the author of the celebrated Annals of Kansas, used to trip the light fantastic toe there. It was said that he courted the girl who afterward became his wife in the Perry home.

During these years, the area flourished as many a traveler made their way along the wagon road, including Mark Twain by some accounts.

The town was surveyed by William Wheeler and officially platted by Royal Baldwin, president of the town company, in April 1859. One block was donated for a market house, and another block for a park for religious and educational purposes. 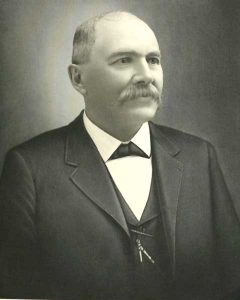 About that same time, a man named George Starke settled in Atchison. However, the city did not offer much inducement for the ambitious young man, and he was desirous of engaging in the mercantile business. Kennekuk was then in the heyday of its prosperity and seemed to offer a better location, and he soon moved there and opened a general merchandise store. His operation was successful from the start and so much so in the next few years that he was enabled to branch out and invest in lands and engage in the banking business. He gained much of his land as it was sold off by the railroads for very low prices and easy terms to induce settlers to locate in the developed regions. While a resident of Kennekuk, Starke was elected to represent Atchison County in the Kansas legislature in 1864.

In 1860, the town was described in a letter as a thriving town where whiskey was its entire business. In 1863 Kennekuk had about a dozen houses with one store and a blacksmith shop. The Kickapoo Indian Agency was one of the most prominent buildings there and was located near the old road in the northwestern part of the town.

In 1867 a substantial stone schoolhouse was built in the community at for about $3,000. However, at about the same time, Kennekuk was passing its prime and began to decline the building of the Central Branch railway out of Atchison, which passed to the south of Kennekuk. At this point, George Starke removed to Atchison and managed his extensive farming interests from this city.

However, the village limped along before its post office closed in October 1900. A decade later, the town was called home to only about 30 people. 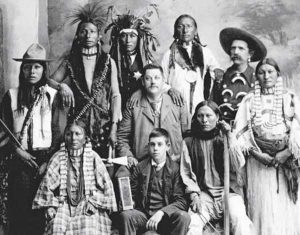 The hamlet was located in the extreme northwestern part of Atchison County, about two miles southeast of Horton, the nearest railroad town.