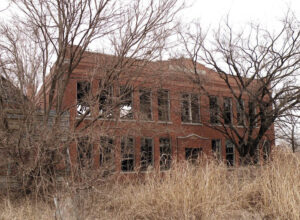 La Fontaine, in Talleyrand Township of Wilson County, Kansas, got its start on March 14, 1879, when a post office was established. Today, it is a ghost town.

Amid an excellent farming community, other settlers followed, and a store was opened.

In 1886 the Missouri Pacific Railroad was built through the area, securing the little town’s future.

On March 13, 1894, the town and post office’s name changed from La Fontaine to Lafontaine.

In May 1896, it was swept by a tornado that destroyed numerous farm buildings, wrecked several buildings, and injured several people in Lafontaine.

The telephone system was installed in 1902. In 1910, it was described as a thriving little town with all the main lines of business enterprise, including a bank, a newspaper, telegraph and express offices, and a money order post office with one rural route. The population in 1910 was 250.

Like many other farm towns in Kansas, in the next decades, the population declined.

Its large two-story brick school closed, businesses moved or failed, and the post office shut its doors forever on August 10, 1991.

Though a few people still live in this tiny community, it has no open businesses, the old school is collapsing, and its streets are lined with broken sidewalks. However, it still boasts the active Calvary Baptist Church. As of the 2020 census, the community’s population and nearby areas was 58. 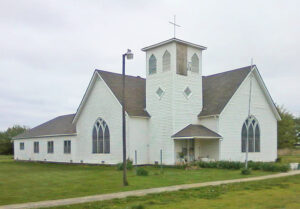 It is located in the southwest corner of Wilson County, eight miles south of Fredonia and west of Neodesha.