Le Loup, Kansas, in the northeastern part of Franklin County, got its start as a station on the Leavenworth, Lawrence & Fort Gibson Railroad in 1870. It is an extinct town today.

The first sermon was preached in the depot building by Reverend Dr. Pile in 1872.

The community was renamed LeLoup after a French traveler got off at Ferguson and mistook a coyote for a wolf and began shouting “le loup.” The community then voted to change the name to LeLoup and the post office’s name changed on May 8, 1879. 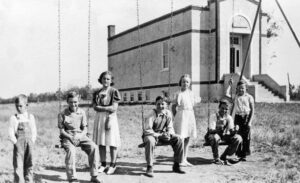 In the summer of 1879, a schoolhouse was built in the south part of town, and the fall term was taught by Cyrus Jenkins.

Some old settlers said that the early progress of the village was slowed by the sale and use of whiskey. However, by the early 1880s, it was inhabited and surrounded by a good, industrious class of people and was described as an important shipping point for grain, hay, and stock.

By 1910, the village was on the Atchison, Topeka & Santa Fe Railroad, had several good stores, a money order post office with one rural route, telegraph and express facilities, and a population of 100.

Le Loup remained a small town in the next decades. Its post office closed on February 15, 1954. 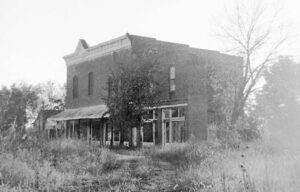 There are still several homes in the area. It was seven miles northeast of Ottawa.