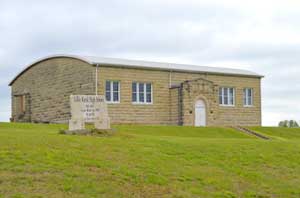 Lillis, Kansas, located in southeast Marshall County on the Topeka–Marysville railroad line, was chartered on October 29, 1906.  Rich in Irish heritage, it was named n honor of the bishop of the diocese, Reverend T.F. Lillis of Kansas City, who was the son of Irish immigrants.

The townsite was platted on the land of Ed Walsh, on the former site of the town of Wyoming. The first house was erected by Patrick Brannan and the first store building by the Lillis Townsite Company. A post office opened on March 3, 1910. In 1910, the State Bank of Lillis was established in a fine brick building. In January 1916, the controlling interest of the bank was bought out by local farmers. The limestone St. Joseph’s Church was built between 1912 and 1916. It continues to be an active church today and is located on 27th Road between Bobcat and Cyclone Lanes.

By 1917, the settlement boasted a two-teacher school with an enrollment of 24 students, a large grain elevator, two stores, a lumberyard, a blacksmith, and a bank. During the Great Depression a high school gymnasium was built by the Works Progress Administration (WPA) in 1936-1938 and dedicated as a memorial to 21 Lillis community men who served in World War I. Listed on the Register of Historic Kansas Places, the building still stands on 28th Road north of Bobcat Lane. 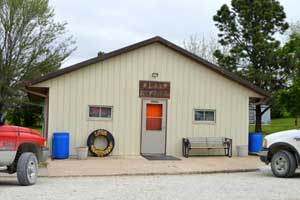 The post office in the community closed its doors on March 7, 1958. Though the town today is little more than a scattering of homes, it continues to boast a restaurant and a well-kept baseball field. Lillis is located about 13 miles southeast of Frankfort at 28th Road and Bobcat Lane.

By Kathy Alexander/Legends of Kansas, updated May 2022.