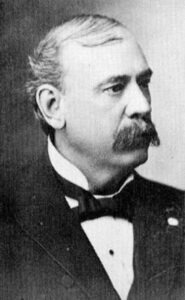 Lorenzo D. Lewelling was the 12th governor of the State of Kansas.

Lorenzo was born in Salem, Iowa, on December 21, 1846. His father, William Lewelling, was a Quaker minister and died in Indiana in 1848 while engaged in missionary work. His mother was accidentally burned to death in 1855, after which Lorenzo made his home with an older sister. He then worked at various jobs until the Civil War broke out in 1861, at which time, he enlisted in an Iowa regiment. This was contrary to the religious tenets of the Quakers, and the fact that he was not of legal age enabled his relatives to secure his discharge. However, he was with the Quartermaster’s Department and later was employed with a government bridge-building corps in Chattanooga, Tennessee.

In 1865, just after the close of the war, he taught at an African American school in Mexico, Missouri, employed by the Freedmen’s Aid Society. Then, after attending a business college at Poughkeepsie, New York, for a short time, he worked as a tow-path boy on the Erie Canal, as a carpenter in Toledo, Ohio, and as a section hand and bridge-builder for several railroad companies. He then returned to his native town and entered Whittier College, where he graduated about 1868. Upon finishing his schooling, he became a teacher in the Iowa State Reform School.

On April 18, 1870, he married Angeline M. Cook, a teacher of Red Oak, Iowa. In 1872 he was made superintendent of the girls’ department of the reform school, his wife was appointed matron, and this position he held for 14 years. He then spent about two years founding and editing the Des Moines Capital, an “anti-ring” Republican newspaper, at the end of which time he returned to the reform school. His wife died while matron of that institution, leaving three daughters, and subsequently, Lewelling married Ida Bishop.

In 1887 he moved to Wichita, Kansas, where he engaged in business and ceased to affiliate with the Republican Party. He was one of the pioneers in the organization of the Farmers’ Alliance and in 1892, was nominated by the Populist Party for governor. The Populist State Convention of that year was held in Wichita, and Lewelling appeared as a private citizen to welcome the delegates to the city. W. J. Costigan, an intimate friend of Governor Lewelling, said: “Up to that hour scarcely a delegate in that convention had ever seen or heard of him. His address stirred the convention to its inmost fiber, and within the next 24 hours, he was its candidate for governor.”

The Democrats endorsed his candidacy, and he was elected. In 1894 he was re-nominated, but the platform declared in favor of women’s suffrage, which alienated Democratic support. This, together with the recollections of the stormy scenes attending the opening days of his administration, encompassed his defeat. In 1896 he was a delegate to the Populist National Convention and the same year was elected to the Kansas State Senate, which office he held at the time of his death.

He died of heart disease in Arkansas City, Kansas, on September 3, 1900.