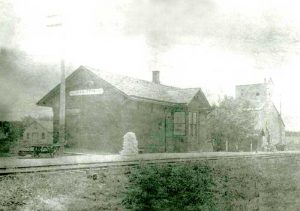 Marietta, Kansas Depot in about 1900.

Marietta, Kansas, a hamlet of Marshall County, was located in Oketo Township on the Union Pacific Railroad eight miles north of Marysville. The town is extinct today.

In 1888 the Union Pacific Railroad, unable to buy land for sidetracks at Oketo, located the tracks 1.5 miles south of Oketo. Angus McLeod, T. J. Mann, and Jacob Lawson platted 40 acres of land for town lots. Sidetracks were then laid, and a depot was built. The McLeod Brothers put up an elevator and, for several years, did a significant business buying and shipping grain. Stockyards were also built, and James Buchanan carried on an extensive business in shipping cattle. In 1889 the Peavy Elevator Company built a second grain elevator.

On April 21, 1890, a post office was established with C. T. Mann as postmaster. It was named for his wife Marietta and initially operated out of the depot. The first general store was started in 1892 by Charles Pritchard, and the post office then operated from that location. That same year, a bridge was built across the Blue River. The United Evangelical church was built in 1901, with Reverend Charles Taylor as pastor. In 1909 the Marietta State Bank was organized with B. R. Bull as president. 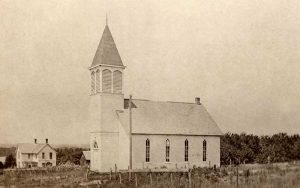 By 1910, the town had a population of 100. In 1914, the Cottrell Brothers put in a lumberyard. In 1917, Marietta was described as a “thriving little village”. At that time, it boasted telegraph and express offices, a general store, a hardware store, a meat market, a barbershop, the lumberyard, and an elevator company. However, there was no school.

In the following decades, the small town declined, and its post office closed in February 1959. However, a Farmer’s Co-op still operates at the old site, which also features a few scattered homes.