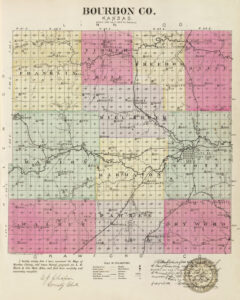 Marmaton, Kansas, first spelled “Marmiton,” located in central Bourbon County, was first settled in about 1857. It is an extinct town today.

A post office was established in Marmiton on September 23, 1857. The Marmiton town company was incorporated and approved by an act of the Legislature on February 11, 1858. The incorporators were T. R. Roberts, James E. Jones, Orlando Darling, and Charles Dimon. The town site consisted of 320 acres.

The first building erected was a store by the town company, and the second building, also by the town company, was a large three-story frame hotel. The first general store was opened by Horatio Knowles, in 1858. The firm became Aiken & Knowles that year. Horatio Knowles built the first dwelling house. During the winter of 1858-59, about 12 more buildings were erected. In 1859, Edward Jones opened another store. The first school was taught by Miss Frances Barrett.

In 1862, the town probably reached its greatest prosperity, at which time it contained a cabinet shop, two blacksmith shops, a furniture store, and a three-story store building containing $14,000 worth of goods.

The Marmaton Massacre occurred on October 22, 1864. The town was sacked and burned by rebels during General Sterling Price’s raid, but not by Price’s men. These Confederate raiders, from Newton County, Missouri, were comprised of about 80 men under the command of Allen Matthews and Major Courcey. Catching the home guard units by surprise because they did not use any main roads, the guerrillas burned two stores, one dwelling house, and the Methodist Church. The store building of Cobb & Jones, valued at $1,500, was consumed together with $13,500 worth of goods. The store building of Aiken & Jones, worth $1,500, containing $15,000 worth of goods was also burned. The house burned belonged to Mrs. Shane, the widow of a Union lieutenant of the Tenth Kansas Regiment. It was worth $500, and the church $800, making a total loss of property amounting to $32,800.

Ten citizens of Marmiton were taken prisoners by the rebels, marched out about one-half a mile, arranged in a row, and fired upon. Six were killed, the rest escaping by running into the woods. The killed were Horatio Knowles, Joseph Stout, Daniel M. Brown, Abner McGonigal, Dr. L. M. Shadwick, and Warren Hawkins. Abner McGonigal was a mere boy, Mr. Hawkins 60 years old, and Daniel Brown was the postmaster at the time. They were killed because they favored the Union cause. 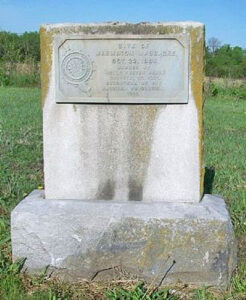 After the attack, the confederate men quickly fled toward Cherokee and Osage Territory further west. However, when they arrived, the Osage tribe feared an invasion and said that the group of Confederates would be arrested if they did not turn back. Refusing to turn back, Matthews and Courcey and their men began a battle with the Osage in which every Confederate man died. Shortly after the Marmaton Massacre, the Battle of Mine Creek occurred in Linn County on October 25, 1864. This battle again resulted in a Union Victory, driving General Price’s troops out of Kansas for good.

In 1882, after the St. Louis, Ft. Scott & Wichita Railroad had been built about three-fourths of a mile north of Marmiton, the first townsite was abandoned, and the buildings were moved to the railroad. The buildings moved consisted of the hotel, two stores, four dwellings, and a schoolhouse. The new town site consisted of 34 acres and was platted and filed on November 18, 1882, by Francis Tiernam, President of the railroad. Edward Jones was the new postmaster. On March 20, 1882, by petition of the citizens, the spelling of the name was changed to Marmaton.

In the early 1880s, the town had a population of about 25. Afterward, the town began to prosper.

In 1910, it was situated on the Missouri Pacific Railroad and was the supply and shipping point for a considerable district. At that time, it had a money order post office, several good stores, express and telegraph facilities, and a population of 108.