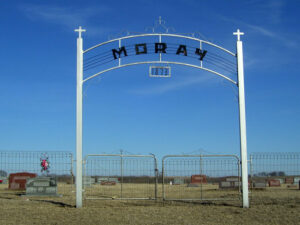 Moray, Kansas in Wolf River Township of Doniphan County, was first called East Norway. It is an extinct town today.

The settlement of East Norway began in 1869 upon the completion of the roadbed of the St. Joseph and Denver City Railway to this point. The townsite property of 18 acres owned by John Hoverson was purchased for $360 by the town company, which consisted of Norwegians O. Nelson, G. Nelson, T. Steanson, N. G. and P. Nelson, and A. Bennett. A year later, G. Nelson sold ten acres adjoining the town to the company and was donated to the railway company in consideration of a depot and side track facilities.

The first buildings were erected in 1871, which consisted of a grain house and residence erected by A. Bennett and a parsonage of the Evangelical Lutherans. A post office was opened in 1873 with I. W. Bennett as postmaster, and two general stores by F. Welton and Hardy Brothers in 1874. Both were burned in 1878, and Welton did not resume business.

A Baptist Church was organized in 1874, and meetings were held in the nearest school house.

By the early 1880s, East Norway was more of a shipping point than a town; most of those doing business here were farmers of the immediate neighborhood.

On December 17, 1894, the name of the town was changed from East Norway to Moray,

In 1910, Moray was little more than a country post office. But, it was located on the St. Joseph & Grand Island Railroad. It had a money order post office, express and telegraph offices, some local trade, and a population of 40.

It was located five miles west of Troy.