Muscotah, Kansas, located about 26 miles west of Atchison in the extreme western part of Atchison County, was first situated about 2 ½ miles northeast of the present-day town. It was surveyed by Dr. William P. Badger and Major C. B. Keith, who had settled there in the spring of 1856. The survey was completed in the fall of that year, and in 1858, Keith opened the first store. Dr. Badger soon became the local Indian Agent, which he held from 1858 to 1862. The town name is of  Kickapoo Indian origin and means “beautiful prairie” or “prairie on fire.”

The village gained a post office in December 1861. However, soon after the town was established, it was determined that the Central Branch Union Pacific Railroad line would pass just to the south, so a new town was built on the railroad line at the junction of Little Delaware Creek and the Delaware River. Hagerman & Roach conducted a grain business in 1865. 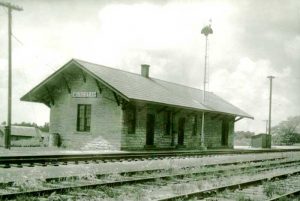 In 1867 the Union Pacific Railroad purchased the new townsite from an Indian, with Dr. Badger acting as an agent for the railroad. The land was surveyed that fall, and William Osborn filed another plat of the town. The first general store was opened by a man named Armstrong. Soon, other residents and businesses moved closer to the tracks, new business buildings and dwellings were built, and the former townsite was then referred to as “Old Muscotah.”

In 1868, Nels Brown established a general store, and a year later, Watson & Guy put in a  hardware store. The same year, Dr. Heath located a few miles out from Muscotah but never lived in the town. The first physician to locate in the present limits of Muscotah was Dr. L. N. Plummer, who came there in 1869. The same year, John Keeley, an enterprising early settler, built a flouring mill on the Delaware River.

A Congregational Church was built in 1869, which also served the congregation of the Methodist Episcopalians. 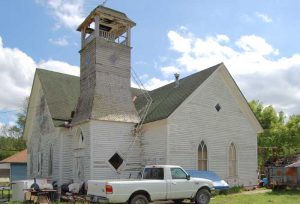 An old church in Muscotah, Kansas, by Kathy Alexander.

The first schoolhouse was built in 1870 but was later destroyed by fire when another six-room school was built in 1885. The first grain elevator was built in 1874. The Methodists built their church in 1879, and the first mayor of the town was Dr. William P. Badger, who was elected in 1882.

Unfortunately, during these early days, several serious fires destroyed much property in Muscotah — the largest being known as the Watson fire, which occurred in 1883.

The Advent Christian church was organized in 1889. Services were held in Mission Hall, which unattached and unorganized Christians maintained. As an important trading point and one of the prosperous towns of the county, Muscotah continued to grow and reached its peak population of 524 in 1890. Unfortunately, the grist mill on the Delaware River was washed away by high water in 1895. 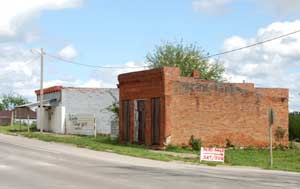 By 1910, the town remained prosperous and continued to maintain several businesses. At that time, its population was nearly 500.

In 1916, Muscotah supported three general stores, a hardware store, two banks, two elevators, a lumber yard, two cream stations, two barbershops, a harness shop, two drug stores, two restaurants, a hotel, a private boarding house, and two garages, and blacksmith shops. The town also supported four practicing physicians and a dentist. That same year, Muscotah was supplied with electricity by a high tension line from Atchison, and the town built 42 street lamps. At that time, the town remained an important shipping point, and the annual shipment of grain amounts to $150,000 to $200,000. In 1915, 52 cars of cattle, hogs, and horses were shipped to the Kansas City and St. Joseph, Missouri markets. 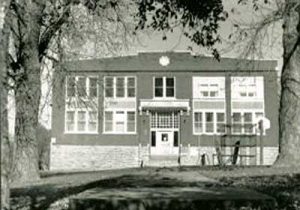 The 1916 school in Muscotah, Kansas, now serves as a private residence.

The town’s public school system included an accredited high school, but unfortunately, the 1885 six-room elementary school was destroyed by fire in January 1916. However, the town soon made plans to build a new combination grade and high school, which would take the place of the one destroyed by fire at the cost of approximately $20,000. The new building was a fire-proof structure of brick and concrete.

Muscotah Schools operated for over 130 years. The final class of Muscotah High School graduated in 1939. It was then reduced to 8th grade, then later to 6th grade. The Muscotah Grade School closed in 1990. Today the building still stands and is utilized as a residence.

Like other small agricultural Kansas towns, Muscotah declined over the 20th century. Though it still maintains a post office and about 165 people, the village is filled with abandoned buildings. It is located about 26 miles west of Atchison on U.S. Highway 159. 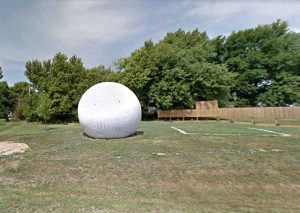 Muscotah, Kansas is called home to the largest baseball in the world. Photo courtesy Google Maps.