Oak Mills, Kansas, once located along the Missouri River in Atchison County, is an extinct town today.

The site was originally home to a Kanza Indian village. Later, in the 1740s,  French fur traders built Fort Cavagnial several miles to the south. The first American settlers came in June 1854, from Iatan, Missouri making the settlement one of the earliest in Atchison County. It gained a post office in January 1868.

It was a busy little town during the years of river traffic and due to its being a station on the Missouri Pacific Railroad. However, by 1910, its population had been reduced to just 86 people; though, it still boasted several stores. 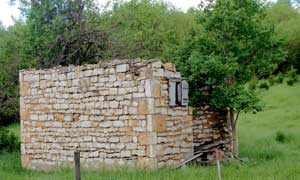 Ruins of the stone jail in the extinct town of Oak Mills, Kansas by Kathy Alexander.

Today, there is nothing left of Oak Mills but a sign erected by the Future Farmer’s of America, one crumbling stone building, and the sounds of the trains that still rumble through the old site. Oak Mills was located about ten miles southeast of Atchison on the River Road.

Reader’s Comments:  Kathy — I came upon the Legends of Kansas website yesterday and sure enjoyed some of the pictures that you must have taken just this last month. We just went up to Atchison County, Kansas yesterday doing some genealogy research and after getting back home I got on the computer and happened on your website. I thought it was very nice.

We have been doing research in the Oak Mills area. My wife’s grandfather and great-grandfather lived in that area from about 1880 to 1910. Her grandfather was born in Oak Mills in 1898. Her great grandfather and his family show up in the 1880 census as living in the Oak Mills area. That picture you took of the stone building is what’s left of the jail. We have a couple of pictures that show some of the other buildings that were located there including the John Davitz General Store. We think my wife’s great grandfather was buried somewhere behind this building in an unmarked grave. But don’t really know for sure but that is what the family history indicates from other family relatives. We discovered a land record at the courthouse yesterday and think we have an idea of where is once lived near the Oak Mills area.

Anyway, I thought the website was interesting with current pictures of some of the area communities in Atchison County. Please continue to keep up the good work.