Ocheltree, Kansas was a village in the extreme southern part of Johnson County. Located two miles north of Spring Hill, and about eight miles south of Olathe, the town is extinct today. 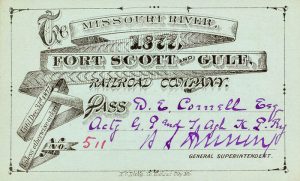 Ocheltree was founded in anticipation of the construction of the Missouri River, Fort Scott, and Gulf Railroad. It was originally platted on a 70-acre townsite in 1867 as “Spring Hill Station.” Like other towns in Johnson County, it is surrounded by an excellent agricultural region.

A town company was formed that consisted of William A. Ocheltree, Mr. Bayless, Edward H. Allen, and Howard M. Holden. It was named for William Ocheltree. Once the town was laid out, the Jackson home was occupied by William Auld who utilized it as a dwelling and as a store.

The second building was erected by a Mr. Baker, in the summer of 1868, who utilized it for a second store. The first home was built by J. M. Miller and James McElheney, the same summer, and within no time, eight or ten other buildings were put up by various parties.

In the beginning, Ocheltree and Spring Hill were rivals in pursuit of the railroad station. Because Spring Hill refused to invest the money required to bring the station to their town, Ocheltree was the winner when the Missouri River, Ft. Scott & Gulf Railroad line reached the area in 1869. The railroad built its depot in Ocheltree and the tracks were built half-mile east of the original town of Spring Hill.

This resulted in Spring Hill residents having to travel to Ocheltree to get their mail or to board a train. A post office was established in Ocheltree on December 1, 1869, with J. M. Miller appointed as the first Postmaster. The first schoolhouse was one moved into the town from the country. 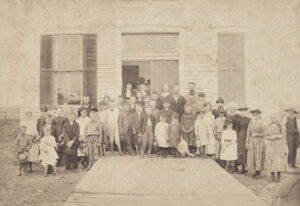 Within a few years, Spring Hill saw the error of its ways, and a depot was built there ending Ocheltree’s early boom.

Still, the village remained a community center for rural residents for many years and was an important livestock shipping point for local farmers. The Lone Elm Grange and the Congregational Church were active community institutions.

A new two-story school was built in 1880 at the cost of $2,000. By that time, the town contained a store, an agricultural implement dealer, a blacksmith, three grain dealers, and about 40 residents.

By 1910, Ocheltree was served by the St. Louis-San Francisco Railway. At that time, the village had an agricultural implement and hardware store, several general stores, a money order post office, telegraph and express facilities, and a population of 75.

However, in the 1920s, the town experienced a downturn. In 1922, the Ocheltree Hotel closed and the depot followed suit in 1928.