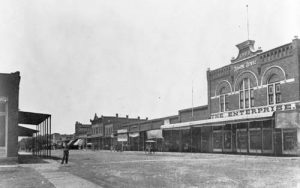 The town was established by agents of the Emigrant Aid Society when Kansas was trying to become a state. It was surveyed in February 1855, and the name was formed by combining Osa, of the Osage Indians, with “watomi” of the Potawatomi tribe.

The first building was erected by Samuel Geer, who used it as both a dwelling and boarding house. The Emigrant Aid Company established a sawmill about ½ mile below the townsite on the south bank of the Marais des Cygnes River, from which came much of the lumber for more new buildings.

These were soon followed by a blacksmith named Mr. Holdridge, and Dr. Darr opened a drug store. Samuel Geer opened the first store and hotel in 1855 and was appointed the first Postmaster in December when a post office was established in the store.

The first church organized was the Congregational, in April 1856, by Reverend Samuel  L. Adair, John Brown’s brother-in-law, but it would be several years before a church was built. A Methodist Church congregation would also be established that year, meeting in private homes. 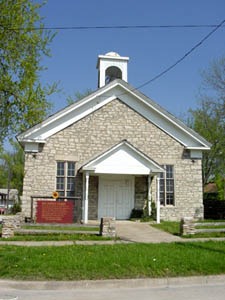 The settlement, established during the years of the Kansas-Missouri Border War, quickly became a target of the pro-slavery faction. The first attack was made on the town on June 7, 1856, when a party of about 150 Missourians, under the command of John W. Whitfield, learned that most of the men of the Free-State forces were occupied elsewhere and converged on the settlement. No resistance was made, and beyond plundering some houses and running off horses, no great damage was done. The village, at this time, consisted of about 30 buildings, and the population was about 200. But, this was to be just the first attack.

On the morning of August 30, 1856, Frederick Brown, son of abolitionist John Brown, left Osawatomie before sunrise to travel to Lawrence. On his way, he was killed by men of the pro-slavery faction. Messengers were dispatched to notify the people in the village, including Captain John Brown, who quickly made plans for the defense of the settlement. John Brown, with 41 men, took a position in the timber on the south side of the Marais des Cygnes River. As the Missourians passed by the settlement, the Free-State men fired upon them. Armed with a cannon, the pro-slavery men returned the fire, and Brown’s men were forced to retreat. The Missourians then entered the town and commenced to pillage and burn it. They first fired at the blockhouse, in which several men were stationed, and only four houses escaped being destroyed. When the ruffians left, they had two wagons filled with their wounded and ten loaded with the plunder taken from the citizens’ homes. 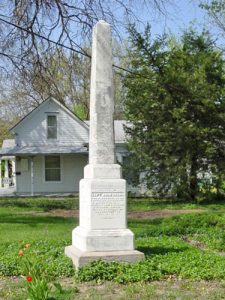 The Free-State men lost about six men killed or captured, and several more were seriously wounded. It is supposed that the Missourians suffered about the same number of dead and wounded, although it was never known.

Notwithstanding these battles and the general troubles of the times, Osawatomie grew and prospered and, in 1857, had grown to about 800 people. The first school was taught in the winter of 1857-58 by Mr. Squires in a frame schoolhouse. The Congregational Church also met in the school building. The community’s first newspaper was also established in 1857, called The Southern Kansas Herald.

Having lost his original hotel in the Battle of Osawatomie, Samuel Geer built a larger two-story frame hotel in 1858. Here, Horace Greeley, Republican Party founder and New York Times editor, made a speech to an assembly of about 5,000 people at the first convention of the Kansas Republican Party in the spring of 1859.

In 1860, the town’s only newspaper, the Southern Kansas Herald, was sold and moved to Paola. It would be several years before another was established in the community. In 1861, the Reverend Samuel L. Adair built a new stone Congregational Church. 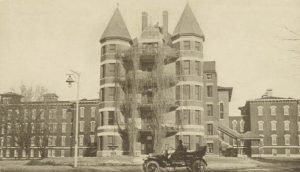 In 1866 the first state hospital for the insane was established about a mile northeast of Osawatomie. It would eventually become one of the largest institutions in the state. Though no longer called the “Kansas Insane Asylum,” the psychiatric hospital still exists and, since 1901, has been called the “Osawatomie State Hospital.”

Before the Civil Civil War, the mentally ill were placed in poor houses, workhouses, or prisons when their families couldn’t take care of them. However, by the 1860s, Americans wanted to provide better assistance to the less fortunate, including the mentally ill. Between 1825 and 1865, the number of insane asylums in the United States increased from nine to 62. “The Lodge,” as it was familiarly called in the beginning, was simply a farmhouse that admitted its first patient on November 5, 1866. It soon grew to an average patient population of 13. 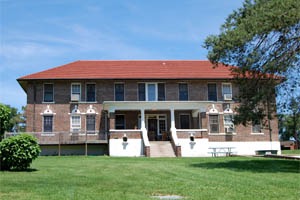 In no time, the two wards, which could accommodate 12 patients each plus the employees who cared for them were filled. Two years later, construction of the Main Building began. When it was fully completed in 1886, the large brick structure ranged from two to five stories and contained two wings in which the patients lived. In the center were the administrative offices, pharmacy, dental clinic, canteen, and patients’ library. Afterward, the “Lodge” was used first as an isolation building for patients with smallpox, then as a farm building before it was torn down.

Additional buildings were added over the years, and by the turn of the century, it included dormitories for employees, shops, an electric power plant, an ice house, bakery, laundry, barns, greenhouses, and a reservoir. In 1912, it could serve more than 1,000 patients. By the mid-20th century, newspapers began to run reports on the deplorable conditions of state-run hospitals, which included neglect, brutality, overcrowded facilities, and the use of restraints. Soon, the Governor and the legislature acted, and reform began that included new facilities and training programs for staff.

A “rehabilitation center,” which included a swimming pool, a well-equipped auditorium, and a modern gymnasium, was completed in 1963. Sadly, the main building was razed in 2002, but several other historic buildings remain. On the outskirts of the property sits a sad little cemetery, where no names are contained on the tombstones — only numbers. The hospital is much smaller today, serving only 176 patients. We have read reports that the grounds are allegedly haunted and were not surprised. However, we could find no detailed reports of activity.

Railroads arrived in the early 1870s, at which time the town prospered as a shipping point for the rich agricultural country surrounding it. The town gained another newspaper, called The Osawatomie Times, in 1881, but it was only published for a year. That same year, the Methodist Church congregation built the second church in the community. By the early 1880s, the town had a stone schoolhouse, two general stores, two grocery stores, two hardware stores, a drug store, a furniture store, a lumberyard, two hotels, three blacksmith shops, a wagon shop, and about 600 inhabitants. 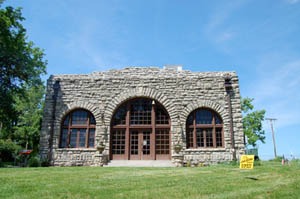 By the early 1900s, the town had once again gained newspapers, including the Graphic and Globe, both weeklies. A larger school building was constructed in 1906. By 1910, the town boasted more than 4,000 people.

Over the next century, though Osawatomie moved into the future, it always maintained its small-town atmosphere and agricultural economic base and held tightly to its rich history. Today, this community of about 4,600 people provides several historic sites for visitors.

Commemorating the Kansas-Missouri Border War and John Brown is the 1877 Soldiers Monument, erected to honor the five men killed in the Battle of Osawatomie,  located at 9th & Main Street.

At the John Brown Memorial Park and State Historic Site, situated on the land where the Battle of Osawatomie took place, is the old Adair Cabin, which is a museum today. The site is located at 10th and Main Street. 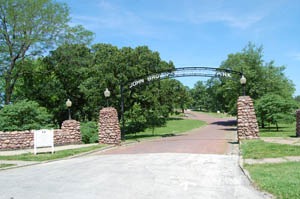 The Railroad Depot Museum, located at 628 Main Street, commemorates Osawatomie’s history as a railroad center. Several other historic buildings and bridges can be seen throughout the town on a Driving Tour of the city.
More Information: