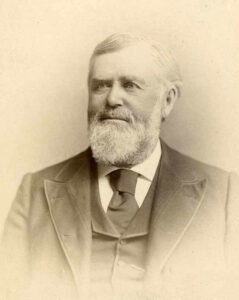 Oscar E. Learnard was a lawyer, journalist, and soldier, who fought to make Kansas a Free-State.

Leanard was born in Fairfax, Vermont on November 14, 1832. Learnard was educated at Bakersfield Academy, the Norwich University, and graduated from the Albany Law School as a member of the class of 1854.

In 1855 he came to Kansas and settled at Lawrence. The next year he commanded a “mounted regiment” of the Free-State forces in the Kansas-Missouri Border War. In the spring of 1857, he helped to locate and lay out the town of Burlington, where he built the first mill, the first business building, and a building used for school and church purposes.

He was a member of the council in the first Free-State Legislature in 1857, was president of the convention which met at Osawatomie on May 18, 1859, and organized the Republican Party in Kansas. After the state government was established he was made a Judge of the Fifth Judicial Circuit.

He resigned from this position during the Civil War to enter the army as a lieutenant-colonel of the First Kansas Infantry and served on the staff of Generals Hunter and Denver until 1863 when he resigned his commission.

When Confederate General Sterling Price undertook to enter Kansas in the fall of 1864, Colonel Learnard again joined the forces for the defense of the state and took part in the Battle of the Blue and the engagement at Westport, Missouri. 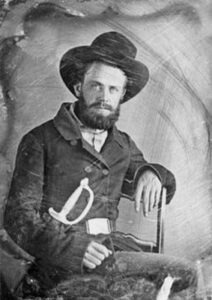 He served two terms in the Kansas State Senate, was superintendent of the Haskell Institute for one year, was for a quarter of a century special attorney and tax commissioner for the Kansas City, Fort Scott & Memphis Railroad Company. In 1884 he bought the Lawrence Daily Journal, which he published for many years.