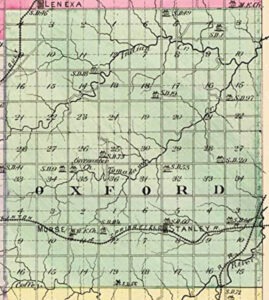 Oxford was laid out in 1857 by pro-slaver Christopher Columbus Catron, an early settler and the town founders.

New Santa Fe was a pro-slavery town located right on the Missouri border east of Kansas. The majority of people who opened businesses and lived in Oxford also supported slavery. The “Oxford Fraud” in 1857 played an important role in the election of Abraham Lincoln and the start of the Civil War.

Oxford was established during the “Bleeding Kansas” days when Missourians and Kansans fought over whether Kansas would become a slave-state or a Free-State. When the Kansas-Nebraska Act of 1854 opened Kansas Territory to settlement and eventual statehood, it allowed residents to decide the issue of slavery. The six-year struggle for control of Kansas Territory turned into a vicious and bloody border war that raged between New England abolitionists who settled the territory to be a “free state” and Missourians who crossed the border to support slavery.

In 1857 President James Buchanan appointed Robert J. Walker as territorial governor to bring peace to “Bleeding Kansas.” During an election held on October 5-6, 1857, a polling place for Oxford Township was set up about a mile south of Oxford. At that time, about 500 legal voters were residing in all of Johnson County, and less than 100 lived in Oxford Township.

Oxford citizens watched as about 90 legal voters cast their votes on the two election days. However, by the following evening, when the votes were tallied, the list of voters in Oxford Township grew to include 1,628 pro-slavery votes cast, with the majority of these voters’ names having been copied from an old Cincinnati, Ohio directory.

Thirty legal voters from Oxford sought out Governor Walker and demanded an investigation. Even though Walker wished to see slavery in Kansas, he had pledged to end unlawful voting. Governor Walker, accompanied by Kansas Secretary of State Frederick Stanton, visited the site, concluding “the whole county of Johnson can give no such vote.” On October 19, he threw out all the votes, giving the Free State Party its first victory, and the blatant election fraud was reported in newspapers across the country. It also angered southern Democrats in Congress, causing a split in the party that allowed Republican candidate Abraham Lincoln to be elected in 1860. Lincoln’s election prompted southern state secessions, which would lead to the Civil War.

In the meantime, the settlement of Oxford grew to be a town of some importance in the next several years with several good stores that carried on a large trade with the surrounding country. Kansas entered the Union as a Free-State on January 29, 1861, just months before the Civil War began.

When the Civil War erupted, most of Oxford’s citizens joined the Confederate Army or the bushwhackers. Town founder Christopher Catron personally led slave owners and their slaves into exile in Texas.

With the dwellings and other buildings left unoccupied, some were used as barracks for Union soldiers. During the harsh winters, some of the buildings were dismantled for firewood. By the close of the war, there was little or nothing left of the town. 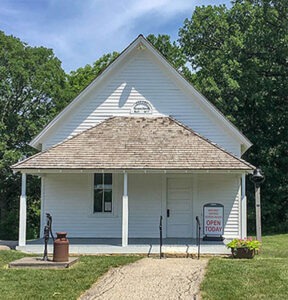 Today there is no marker or monument to commemorate the old town of Oxford that once stood at about 123rd and State Line in present-day Leawood, Kansas. However, its one-room schoolhouse still stands. One of the oldest remaining schools in Kansas, it was built in 1877 and operated until 1955. In 2003, it was moved from its original location at Mission Road and 135th Street to Ironwoods Park at 147th and Mission Road.