Padonia, Kansas, is an extinct town in Padonia Township of Brown County. The first settler in the area was E. R. Cornelison, who took a claim on April 3, 1854.

In 1856, John Schmidt built a sawmill on the Walnut River near Padonia, and a substantial dam was erected.

The post office was established on October 20, 1857, and Orville Root was the first postmaster. The town was named in honor of Jessie Padon, who lived in a log hut on the bank of the Walnut River.

The Padonia Town Company built a schoolhouse in 1858.

Samuel Danes was the proprietor of Padonia Flouring Mills in 1876. He had purchased the mill property and put in new machinery. Situated on the west bank of Walnut Creek and it was the only water-power mill in the county. It had two 20-inch wheels, three runs of buhrs, and a capacity for making 30 barrels of flour daily, which he sent to Hiawatha, Hamlin, White Cloud, Falls City, Nebraska, and various other distributing points.

By the early 1880s, Padonia was a station on the Missouri Pacific Railroad, but the town had grown very little and was said to have been “more of a thick settlement of farmhouses.” 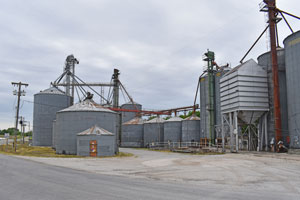 In 1882, E. Chase & Son began an extensive merchandise business with Eddie A. Chase as the general manager. They had a 50×20 foot store room and two floors that were completely filled with general merchandise. They were also extensively engaged in shipping grain and livestock.

In 1910, the community was still located on the Missouri Pacific Railroad. At that time, it had a flour mill, several well-stocked retail establishments, churches and schools, express and telegraph offices, a money order post office, and a population of 104.

Amazingly, this tiny place that has been extinct for so long still has grain silos, a couple of buildings, and a few area homes.

It is located five miles north of Hiawatha. 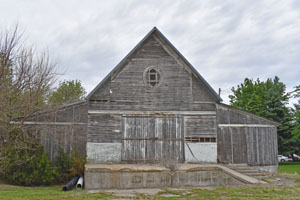 An old business building in Padonia by Kathy Alexander.