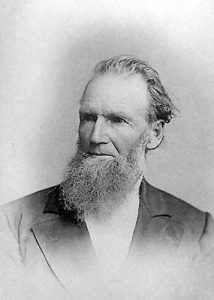 Pardee, one of the oldest settlements in Atchison County and the first in Center Township, was established by Caleb May in October 1854.

May was President of both the Monrovia and Pardee Town Companies. The town was named for Pardee Butler, an abolitionist minister from Atchison. In August 1855, the first post office in the township was established at nearby Ocena.

Reverend Pardee Butler organized the Christian Church before the town was platted, and he became its pastor.

Pardee was platted in the spring of 1857 by James Brewer, and S.G. Moore was the first settler. A schoolhouse was built in the fall, and Minister Butler preached his first sermon there just a few months later. In the fall of 1858, Pardee Butler relocated near the town. The same year, the first store was opened by Mr. Moore, and in August 1858, the post office was moved from Ocena to Pardee, and Moore was appointed as postmaster.

The Methodist Episcopal Church was established in the spring of 1868, and in 1874 Milo Carlton put a windmill in operation.

By the early 1880s, the town was called home to about 100 people and had two stores, two churches, a public school, and a private school. But, because of its location off the railroad line, it was not growing. In August 1902, its post office closed briefly but reopened in October. However, less than a year later, it closed its doors forever on March 31, 1903.

The settlement was located in the southern part of Atchison County, about three miles south of Farmington.