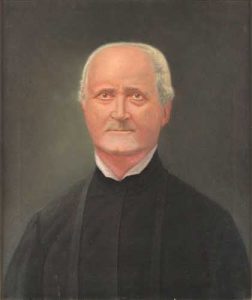 Paul M. Ponziglione was an early Catholic missionary who worked in southern Kansas and Indian Territory, particularly among the Osage Indians.

Ponziglione was born on February 11, 1818, in Cherasco, Piedmont, Italy. He was of noble descent, his father having been Count Felice Ponziglione di Borge d’Ales, and his mother Countess Terrero Castelnuoro. After his preliminary education, he attended the Royal College of Novara and subsequently the College of Nobles at Turin, both Jesuit institutions, taking his degree at Turin. He then studied law for over a year but seemed to turn naturally to the priesthood and, in 1839, entered the Society of Jesus at Chieri, near Turin.

In 1848 he was connected with the Jesuit College at Genoa during a period of disturbance in Italy, and at one time, 18 of the priests in the college were arrested by one of the political factions. They were sent to Spezia but managed to escape to Modena, where most took to the mountains. Father Paul determined to go to Rome and then to the United States. He reached Rome, where he was ordained a priest on March 25, 1848, and soon after that came to the United States.

From New York, he went to St. Xavier’s College at Cincinnati, Ohio for a short time, but before leaving Italy, he had made up his mind to spend his life as a missionary among the Indians. Following out his resolve, he offered himself to Reverend Anthony Elet, the Superior of the Western Jesuits of the United States, and was assigned to the Missouri Mission. He worked in Missouri and Kentucky for two years and then returned to St. Louis. 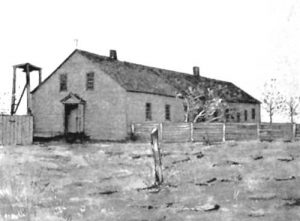 In March 1851, he left St. Louis for the region west of the Missouri River. While his home was at the Osage Mission and that tribe his special charge, his labors extended from Fremont Peak, Wyoming to Fort Sill, Indian Territory (Oklahoma.) For 20 years, Father Paul’s work was with the Osage Indians, which was one of the brightest periods in the history of the tribe. He was an honored guest among them, baptized and taught their children, and ministered to their bodily and spiritual needs.

The particular scope of his work in Kansas was from Cherokee County north to Miami County, then west to Fort Larned in Pawnee County, along the southern border of the state. He also penetrated the wild regions of Indian Territory and established mission stations at the Indian agencies and military posts.

Within 40 years, he established over 100 missions — 87 in Kansas and 21 in Indian Territory. In 1870, the Osage tribe withdrew from Kansas, but Father Paul still watched over them, making the trip by wagon from the old mission to their new home in the Indian Territory. The beautiful church at the Osage Mission, known as St. Francis, next to the cathedral at Leavenworth, was the finest in the state. It was built through the efforts of Father Paul and was dedicated on May 11, 1884. In 1889 he was asked to go as a peacemaker to the Crow Indians in Montana and did not return to Kansas. The next year he became the historian of St. Ignatius’ College in Chicago, Illinois, and assistant pastor of the Jesuit church. His sympathies were so broad that he also became the chaplain of St. Joseph’s Home for Deaf-Mutes. He died in Chicago on March 28, 1900. 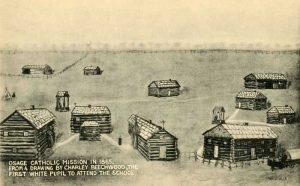