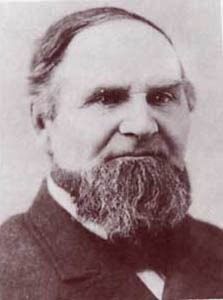 Peter Percival Elder was a politician, Indian Agent, and businessman who was intimately connected with Kansas affairs for many years.

He was born in Somerset County, Maine, on September 20, 1823, and educated in his native state. In 1857 he came to Kansas, settling in Franklin County, which he helped to organize. In 1859 he was a delegate to the Osawatomie Convention, which organized the Republican Party in Kansas, and in 1860-61 he was a member of the Territorial Legislative Council. President Abraham Lincoln appointed him Indian Agent of the Osage and Seneca tribes at Fort Scott, Kansas, and while serving in that capacity, he recruited a regiment of Osage men for service in the Union army in the Civil War. Alter four years as an Indian Agent; Elder resigned and in 1865 engaged in the banking business at Ottawa.

In 1870 he was elected Lieutenant-Governor on the Republican ticket. Subsequently, he served several terms in the state legislature; was speaker of the house in 1878 and again in 1891. He was still living in Ottawa in the early 20th century, but by then was retired. He died in 1914.