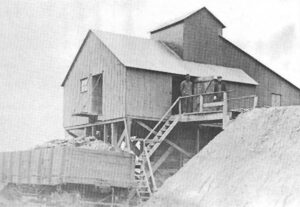 Peterton, Kansas located in Osage County was a coal mining town. It is extinct today.

In the early 1880s, it was a station on the Atchison, Topeka & Santa Fe Railroad and had a population of about 500, consisting almost entirely of miners. it had a large schoolhouse and the frame homes were generally by their occupants.

The Osage Carbon Company owned most of the coal fields around Peterton, including two shafts that employed 100 men and turned out, in the busy season, about 150 tons of coal per day. They also own several drift and strip mines. Within a short distance, there were four more shafts, each owned by different firms, which employed a number of men and were doing a thriving mining business.

It was located about three miles north of Osage City.