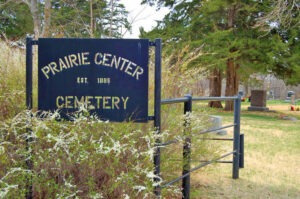 Prairie Center, Kansas, also spelled Prairie Centre, was a village in the western part of Johnson County. It was also known as “Bear Paw” or “Bear Foot.”

It received the name because it was located about an equal distance from four towns in the center of a prairie. The first settlement was made in 1871 and David Vestal opened a general store the same year. On February 28, 1872, a post office was opened in the general store with David Vestal serving as the first postmaster. A schoolhouse was built and the Quakers erected a church in 1874. By that time, about 75 people lived in the town that also had a blacksmith and a woodworking shop. Within a short time, the Methodists and Free Methodists also built churches.

In 1877, W. C. Barnes, a physician, came in 1877 and set up an office and drugstore. Later businesses included a meat market and a dressmaking and hat shop.

A larger Quaker church was built in 1892. Records of that decade show that G. A. Boynton owned one of the town’s general stores and the Johnson Company, operated the other. A creamery cooperative was also established. W.G. Rice, a blacksmith, set up a cider mill powered by a one-cylinder steam engine. Another mill, operated by William Andrew, crushed sorghum cane with large rollers powered by horses.

The post office was discontinued on October 15, 1902, at which time, the town received rural delivery from Eudora. It still had a population of 70 in 1910 but it continued to decline. The general store closed in 1916. 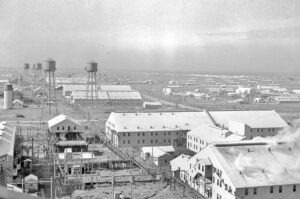 In 1942, Sunflower Ordnance Works was established to make ammunition during World War II. To build the 10,000-acre complex south of De Soto, more than 100 farm families had to move, and the small towns of Lexington and Prairie Center were razed with the exception of a church and a filling station.

Sunflower Ordnance Works produced ammunition off and on for decades.

By 1984, only one home remained in what was once Prairie Center. The plant closed in the 1990s and Kansas State University obtained a long-term lease on a portion of the property for a horticultural research and education center.

The town was located eight miles southeast of Eudora in Johnson County’s Lexington Township in the vicinity of 135th St between Sunflower and Edgerton Roads. 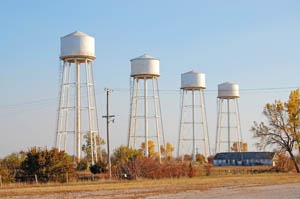