De Soto, Kansas, in Johnson County, got its start in the spring of 1857 and was named for 16th-century Spanish explorer Hernando de Soto. It is located in the northwestern part of the county on the south bank of the Kansas River. 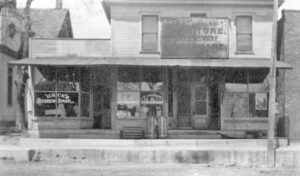 The town was platted, and a town company was formed in 1857, composed of B. W. Woodward, James F. Ligate, James Findley, and G. W. Hutchinson.

Zera Nichols occupied the first frame building in the town as a general store in 1857, and Stratton & Williams built a sawmill on the river bank. D. Rolfe was employed as an engineer for a year, and he liked the country so well that he sent for his family and they arrived in April 1858. Two or three buildings were erected in 1857.

Two years later, the legislature of 1860 granted another ferry charter for De Soto. Rates of ferriage prescribed were identical with those of the act of 1858. It appears that this ferry also never operated either, as the legislature of 1861 granted a 15-year franchise for a ferry to Warren Kimball and George W. Fraim, with exclusive rights for two miles up and two miles down the river. This firm probably made a “good” of it this time. 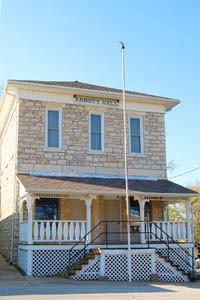 Major James B. Abbot is remembered as one of the town’s pioneer landowners and the builder of Abbot Hall. He was involved in various Free State activities and in conflicts in Kansas Territory. He acquired the so-called “Abbott howitzer” in Kansas City and participated in the rescues of both John Doy and Jacob Branson. He was also involved in the Battle of Black Jack and was acquainted with abolitionist John Brown. Today, Abbot Hall is one of two town museums.

On January 14, 1863, the post office from nearby Lexington was moved to De Soto.

In 1866 the stone Methodist Church was built for $2,500. Previous to this time, parishioners had met in private homes and the hotel.

In the late 1860s, the Atchison, Topeka & Santa Fe Railroad began to build their line through the area.

In 1879, the Presbyterian Church was built.

A two-story flouring mill was erected in 1879, near the depot, by Skinner & Barrett. 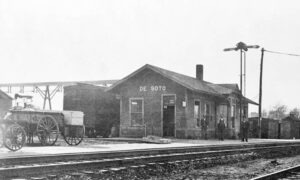 The town grew slowly and by 1910 had a population of 240. However, it boasted several general stores, hardware and implement house, a lumber yard, a good public school system, a money order office, telegraph and express facilities. It was the shipping and supply point for a considerable district.

In 1912, the De Soto Eagle Eye newspaper began to be published by Wiard & Wiard. By 1915, the town was reported to have also had a city light plant, a grain elevator, The De Soto State Bank, two physicians, and a drug store.

When construction began on the 9,080-acre Sunflower Ordnance Works south of De Soto began in 1942, the town changed dramatically. As workers came from all over the country looking for work, trailers and tents popped up all over town due to a housing shortage. De Soto residents rented spare rooms, garages, and even chicken coops to Sunflower workers.

DeSoto’s population boomed in the early 1940s. In 1943, Sunflower Village was built to house workers of the ammunition plant. Initially, 853 dwellings were built, and another 580 units were completed by 1945. Housing, a school, and traffic were filled and overflowing. The housing project was located across old Kansas Highway 10 from the plant. Sunflower Village housed 6,000 workers at its peak. 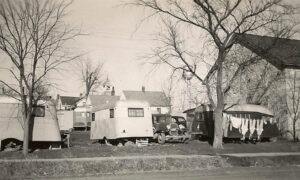 Like much of the rest of northeastern Kansas, De Soto was hit by the Great Flood of 1951. In mid-July, heavy rains led to the Kansas River flooding. De Soto, along the south side of the river, was severely damaged after the river crested at 42.3 feet. Most of the downtown area was completely flooded, with over four feet of standing water in some places.

In 1955, the housing units in Sunflower Village were sold to private buyers. In 1961, the homes were purchased by Quick Way Homes and renamed Clearview City.

The Sunflower Army Ammunition Plant had gone on standby several times during its existence but was closed in 1993. In 1998, Clearview City was annexed by the city of De Soto, boosting the city’s population by 339 people.

In the following two decades, substantial commercial development occurred along the K-10 Business District, and numerous homes were built.

“De Soto was, and is expected to remain the fastest-growing city in the Kansas City metro area.” — Kansas City Star, 2019 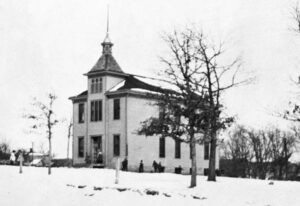