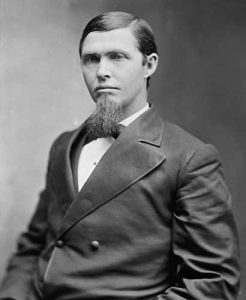 Preston B. Plumb was a lawyer, United States Senator from Kansas, an officer in the Union Army during the Civil War, and a founder of Emporia.

Plumb was born in Delaware County, Ohio, on October 12, 1837. He received a public school education and attended an Episcopal institution in Union County for a time. While there, he learned the art of printing and worked on newspapers in Springfield and Xenia. He aided in establishing the Xenia News, in which he was financially interested. There, he imbibed his first political opinions, which were sympathetic to the Free-State cause in “Bleeding Kansas,” where political and social conflict was occurring between pro-slavery “border ruffians” and antislavery “jayhawkers.”

By June 1856 Plumb decided to make a preliminary trip to Kansas with the intent of moving there to support the Free-State movement. He visited antislavery settlements in Fort Leavenworth, Lawrence, and Topeka, before returning to Ohio. Later that year, the 18-year-old Plumb brought 10 recruits and two wagons into Kansas Territory, loaded with weapons including a brass cannon. Plumb and his men, called “Grizzlies,” delivered their military cargo to Topeka on September 25, 1856. Plumb also invested in and became one of the founders of the town of Emporia.

He moved from Ohio to the Kansas Territory and in 1857 started a newspaper at Emporia called the Kanzas News. He immediately allied himself with the Free State party and soon became a recognized leader in its councils. He was elected to the Leavenworth Constitutional Convention in 1859 from Breckenridge (now Lyon) County. Having in the meantime studied law, he was admitted to the bar in 1861. The same year, he acted as a reporter for the State Supreme Court but soon resigned. The following year he was elected to the State House of Representatives and became Chairman of the Judiciary Committee. 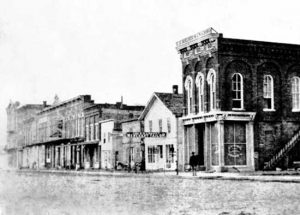 In 1862, he entered the service of the Union Army as a second lieutenant in the Eleventh Kansas Infantry and served successively as captain, major and lieutenant-colonel of that regiment. He took an active part in the running fight during William Quantrill’s retreat from Lawrence and all other engagements of the regiment, which saw much hard service and was held for duty on the plains as protection against the Indians, being one of the last to be mustered out of the service. Plumb returned home after the war and engaged in the practice of law which he had dropped when he had enlisted. He soon became prominent in his profession and in politics; was elected to the State House of Representatives in 1867; and was re-elected in 1868, when he served as speaker of that body. He was forced to give up the law because of failing health and became president of the Emporia National Bank in 1873. Four years later, he was elected as United States Senator to succeed James M. Harvey, and took his seat on March 4, 1877. One of his first official acts was to secure an order allowing actual settlers to enter the Osage Indian ceded lands, covered by railroad contracts. Plumb was twice re-elected to the senate, and at his death, had held nearly two years of his third term, having served nearly 14  years continuously in the senate. His last election was practically without opposition. Plumb died on December 20. 1891 at Washington, D.C.