Purcell, Kansas is an extinct town in Union Township in southwest Doniphan County.

Before the establishment of Purcell, this area was known as St. Thomas or St. Mary’s Colony. In 1858, the first Mass in the settlement was celebrated in the home of John Murray. Other families in the congregation were those of John Normile, John Purcell, Lawrence Doyle, and Nicholas Delzeit.

In 1886, the town of Purcell was founded about a mile southwest of St. Mary’s Church. It was located on the old Pony Express Trail and on the Chicago and Rock Island Railroad. It was named for John Purcell, who had settled near the church years earlier. Some early settlers were Patrick Shaughnessy, John Whelan, Patrick Brady, David Whelan, Pater Heichenberger, and Kasper Troll.

By 1889 the parish had grown to 56 families, and the original frame church had become too small. Though the parishioners agreed that a new church was needed, they were divided regarding the location of the new church. Some wanted Purcell, one-half mile south and one-half mile west of the old site; another group wanted to build on the old site, and still, another group wished to enlarge the old church in opposition to Bishop Louis Mary Fink’s directives. Since the parish was so divided on a location, the bishop directed that the matter be dropped until the parish was more united. At this time, the parish numbered 160 members. 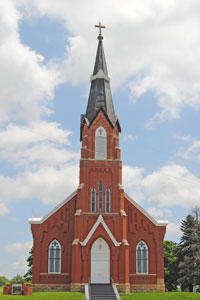 By 1896, $8,000 had been raised by the congregation. Plans were drawn and approved, and it was necessary to decide where to locate the church. On March 1, 1896, the congregation and the parish voted 52 to 25 for Purcell.

John and Catherine Purcell donated three acres of land. On April 13, 1896, a contract was made for $10,500 to Matthias Schnell of Rochford, Illinois, to build the church with J. H. Bennet of St. Joseph, Missouri as the architect. Work began immediately, and the structure was completed and blessed on October 28, 1896. The Late Gothic Revival church was built with red bricks and a central tower with one bell crowned by a steeple. The steeple reaches a height of 112 feet. On the front, the brick forms an ornamented facade. Concrete steps leading into the church are on two levels. A rectory was also added.

The site of the former church was then converted into the parish cemetery.

In 1906, the parish contracted for a school to be built for $5,310. It opened in September 1908 with 60 students — grades one through nine. It also had a residence for teachers.

By 1910, Purcell had banking facilities, telegraph and express offices, a money order office, and a population of 150.

By 1915 there were 109 students enrolled in the school, including 13 students in the second-year high school course. The next year, a high school opened with nine pupils.

In 1926, a combination parish hall and gymnasium was built. This structure cost slightly more than $10,000. By that time, the high school had 23 students.

Unfortunately, the increasing size of individual farms and the consequent decline in the number of farmers reduced the area population. The high school was discontinued in 1934. The grade school also declined, and in the school year 1935-36, it had only 30 students.

Purcell’s population continued to decline in the next decades, and its post office closed on June 11, 1956. The grade school closed in 1960. 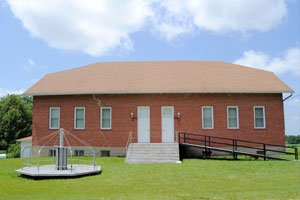 Today, the old town includes only a scattering of homes. However, St. Mary’s Catholic Church is still active and is listed on the National Register of Historic Places. At some point, the rectory and the combination school and residence for teachers were torn down. However, the combination parish hall and gymnasium still stands.