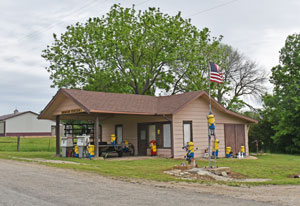 In January 1855, a party composed of Aaron Cook, George Cook, A. Pearsall, and James Dempsey, of Black Hawk County, Iowa, arrived in the township and followed up the military road west of Osawkie to Rock Creek, where William Wade selected his claim. From there they went up the creek one mile, and here Dempsey located a claim. The others also located claims in the neighborhood.

The town of Rock Creek was established in 1857.

Later, the Atchison, Topeka & Santa Fe Railroad came through the area and Rock Creek became a railroad station on the line. The post office was moved from Cooks Ford to Rock Creek on December 19, 1872. Though the town had a store and a post office by the early 1880s, a townsite had not yet been surveyed. 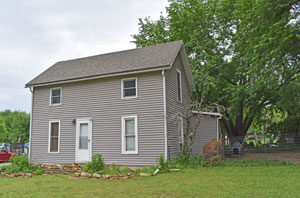 The town grew slowly but by 1910, it had some general stores, a money order post office, express and telegraph offices, and a population of 150.

Years later, the railroad pulled out of the area and K-4 Highway that initially ran through Rock Creek on Rock Creek Road was widened and rebuilt just east of Rock Creek.

Today, Rock Creek is a cluster of homes with no open businesses. It is located along 110th Road near its intersection with K-4 Highway about midway between the towns of Valley Falls and Meriden.

The community is served by Jefferson West USD 340 public school district in Meriden.