Salt Fork of the Arkansas River in Oklahoma by the Department of Interior.

The approximately 192-mile long waterway rises in Comanche County, Kansas, and flows initially southeastwardly through Barber County, Kansas, into Woods County, Oklahoma, where it turns eastwardly for the remainder of its course through Alfalfa, Grant, Kay and Noble Counties in Oklahoma It flows into the Arkansas River in southern Kay County, about seven miles south of Ponca City, Oklahoma. 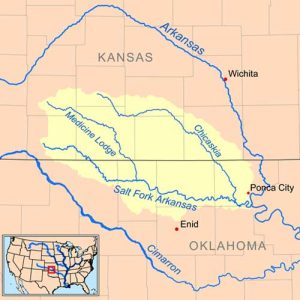 In Alfalfa County, Oklahoma a dam on the river maintains the Great Salt Plains Lake, which is lined with salt flats and is the site of Great Salt Plains National Wildlife Refuge and a state park. The Salt Fork’s largest tributaries are the Medicine Lodge River, which joins it in Alfalfa County and the Chikaskia River, which joins it in Kay County, Oklahoma.