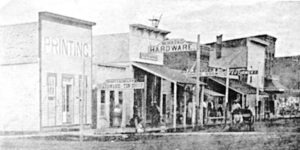 Samuel Lappin was prominent in Kansas political affairs and was tried for forgery, counterfeiting, and embezzlement.

Lappin was born near Cumberland, Ohio, on January 4, 1831, the son of Finley Lappin.

He came to Kansas from Louisiana in the winter of 1856-57, settling first at White Cloud, but moved to Seneca in the autumn of 1857. He was one of the town’s incorporators. He was elected justice of the peace on May 5, 1858. He was elected register of deeds for Nemaha County on November 8, 1859, serving until 1861. He was a member of the first State Senate in 1861-62 and subsequently served in the State Legislature’s lower house. He served in the house again in 1859 and was a director and president of the Northern Kansas Railroad and Telegraph Company.

During the Civil War, he was appointed Assistant Quartermaster with the rank of captain in the Union Army on November 26, 1862. He served in that capacity until he was mustered out on September 20, 1865.

He was elected Kansas State Treasurer in 1874.

On December 9, 1875, school-fund commissioners discovered that forged school bonds of Jewell, Mitchell, and Republic Counties had been bought with money from the state treasury. Upon investigation, two commission members were convinced that Lappin was the forger of the bonds and the recipient of $19,050. Governor Thomas Osborn was notified on December 11 and demanded Lappin’s resignation, which was at once tendered and accepted.

On December 21, 1875, a suit was filed against Samuel Lappin for “forgery, counterfeiting, and embezzlement.”

On December 31, Lappin was allowed to go to Seneca, in charge of a deputy, to arrange for a bond. After gaining one, he left for Chicago, Illinois. However, Lappin was short $830 in his cash account, and the governor ordered his arrest. He was arrested in Chicago on January 13 and returned to Topeka.

In the meantime, Charles G. Scrafford of Seneca, his brother-in-law and business partner, left December 13 and fled to Peru. Their conspiracy to defraud the state dated from about August 1, 1875.

Lappin attempted to escape from jail on the night of June 10, 1876, but was caught in the act of crawling through a hole in the floor of his cell — a difficult feat considering his weight, which was 235 pounds. On July 11, he escaped through the window and had a horse team and wagon waiting for him. He eventually made his way to South America.

He returned to the United States in 1880. He was recognized in Washington Territory and, on October 23, 1884, was brought back to Kansas for trial. The state’s claims were finally satisfied through the sale of  Lappin’s property, and on December 24, 1885, the case was dismissed.

Lappin again took up his residence in Seneca, Nemaha County, but later moved to La Center, Washington, where he died on August 4, 1892.