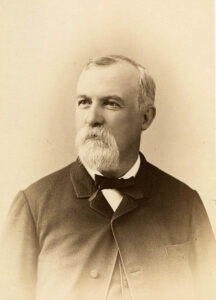 Osborn was born in Meadville, Pennsylvania on October 26, 1836. During his boyhood, he attended public schools, and at the age of 15, he entered a printing office and learned the trade. While serving his apprenticeship he saved his money, entered Allegheny College, and paid his own way through. In 1856 he began the study of law with Judge Derrickson of Meadville and the following year he moved to Michigan, where he was admitted to the bar.

In November 1857, he came to Lawrence, Kansas, where he found employment with the Herald of Freedom as a typesetter, assistant foreman, and temporary editor. He remained with the paper until March 1858, when he began the practice of law at Elwood, Doniphan County. Although but a few months past his majority, he was an ardent Free-State man, and soon after locating at Elwood he became an active factor in shaping the political destinies of Doniphan County. On December 6, 1859, he was elected state senator from the county to the first state legislature, which met in March 1861. At the second session of this legislature, in 1861, Mr. Osborn was elected president of the senate over John J. Ingalls, and while holding this position he presided over the impeachment trials of the governor, secretary of state, and auditor.

In November 1862, he was elected Lieutenant-Governor on the Republican ticket, and in April 1864, he was appointed by President Abraham Lincoln  U.S. Marshal for the District of Kansas. He then moved to Leavenworth, Kansas.

When the difference of opinion arose between President Andrew Johnson and Congress in 1867 Osborn advocated the Congressional policy of Reconstruction and was removed from the marshalship, but his removal added to his popularity. In 1868 he was a member of the Republican State Central Committee; was elected governor in 1872, and was re-elected in 1874 for the term ending in January 1877.

On May 31, 1877, he was commissioned by President Hayes Envoy as Extraordinary and Minister Plenipotentiary to Chili, and in June he started for Santiago. In 1881 he was promoted to the Brazilian Mission, but before leaving Chili he received the public thanks of the government for his work in settling the question of boundary between that country and the Argentine Republic.

Upon his return home from South America, Osborn became interested in various business enterprises including banking, railroad construction, and real estate.  As early as May 1866, he had been one of the North Kansas Railroad Company and was a director of the Atchison, Topeka & Santa Fe Railroad from the time the company was organized until his death.

In 1898, he went to New York to attend a meeting of the railroad directors and stopped at Meadville, Pennsylvania for a short visit with some of his old boyhood friends. While he was there he suffered a major hemorrhage on February 4, 1898, and died within a few hours. His remains were brought to Topeka and laid to rest by the side of his wife, who had died some years before.