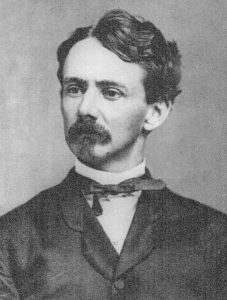 “Kansas is the core and kernel of the country, containing the germs of its growth and the quickening ideas essential to its perpetuity.”

John James Ingalls was a Free-State advocate, author, orator, and politician who served as United States senator from Kansas. Ingalls is credited with suggesting the state motto and designing the state seal.

Ingalls was born at Middletown, Massachusetts, on December 29, 1833, to Elias T. and Eliza Chase Ingalls. He was a descendant of Edmond Ingalls, who founded the town of Lynn, Massachusetts, with his brother Francis, in 1628. In 1855 he graduated from Williams College in Williamstown, Massachusetts, and two years later was admitted to the bar in his native county of Essex.

In 1858, he came to Kansas Territory, initially settling in the now extinct town of Sumner in Atchison County. He joined the anti-slavery forces and worked to make Kansas a Free State. Known for his keen sarcasm and quick wit, Ingalls was just 26 years old when he was a member of the Wyandotte Constitutional Convention in 1859 that brought about Kansas statehood. He was secretary of the Territorial Council in 1860. That year, Ingalls settled in Atchison, where he practiced law.

“The aspiration of Kansas is to reach the unattainable; its dream is the realization of the impossible.”

While secretary of the State Senate in 1861, at the first session of the state legislature, he submitted a design for a state seal, and in 1862 was elected to the State Senate. He also coined the state motto, Ad Astra per Aspera. 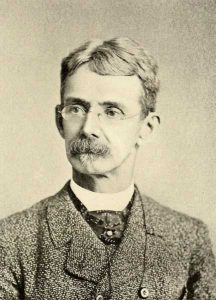 During the Civil War, he served as Judge Advocate on the staff of General George W. Deitzler, with the rank of lieutenant-colonel, and in 1864 was nominated for Lieutenant-Governor on the “Anti-Lane” ticket. Ingalls married Anna L. Cheeseborough of Atchison, Kansas, in 1865, and in 1873, he was elected to the United States Senate to succeed Samuel C. Pomeroy. He was twice re-elected and served in the Senate for 18 years (1873 – 1891), part of that time being the presiding officer.

He was a great reader, a fine parliamentarian, and was probably the readiest man in a debate that ever represented Kansas in the upper house of Congress. Senator Isham Harris of Tennessee said of him:

“Mr. Ingalls will go down in history as the greatest presiding officer in the history of the senate.”

Ingalls also dabbled in and often succeeded in many things besides politics, including law, literature, banking, real estate, and the newspaper business. He was also possessed of fine literary talent, and had he turned his attention in that direction instead of entering politics; his name would no doubt have been among the great writers of the country. His poem entitled “Opportunity,” which has been widely quoted, is a classic.

Ingalls’ public career was ended in 1891 when he was replaced in the U.S. Senate by W. A. Peffer, a Populist. Following his public service time, he wrote magazine and newspaper articles extolling the virtues of Kansas, utilizing his excellent knowledge and understanding of the ins and outs of Kansas politics during the first 50 years of statehood.

He died in Las Vegas, New Mexico, on August 16, 1900, and was buried in his hometown of Atchison. He was honored in 1905 with a marble statue in National Statuary Hall in the U.S. Capitol.

His writings, including essays, addresses, and orations, were published in 1892 by his wife, and the book was dedicated to the people of Kansas.

“Kansas, has been the testing ground for every experiment in morals, politics, and social life…every political fallacy nurtured by misfortune, poverty, and failure… has here found tolerance and advocacy…something startling has always happened, or has been constantly anticipated.”