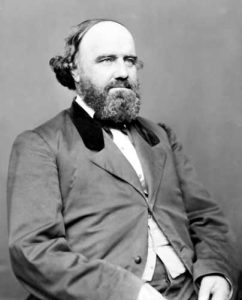 Samuel Clarke Pomeroy was a pioneer and United States senator from Kansas who served during the Civil War.

Pomeroy was born at Southampton, Massachusetts on January 3, 1816. When he grew up, he was educated at Amherst College, and in 1840 became an enthusiastic opponent of slavery. He was present when President Franklin Pierce signed the Kansas-Nebraska Bill, and remarked to the president:

“Your victory is but an adjournment of the question from the halls of legislation at Washington to the prairies of the freedom-loving West, and there, sir, we shall beat you.”

To assist in carrying out his prophecy, he left Boston in August 1854, with 200 people bound for Kansas of the Free-State cause; was one of a party arrested by Colonel Cooke on the Nebraska River in October 1856, but was released by Governor John Geary upon his arrival at Topeka. He was a member of the Osawatomie Convention in May, 1859 that organized the Republican Party in Kansas, and served on the first State Executive Committee of that party.

In connection with his management of the aid committee for the relief of the people of Kansas in the great drought of 1860 he was charged with irregular conduct, but was exonerated in March, 1861. On April 4, 1861, he was elected as one of the first United States Senators from Kansas and was re-elected in 1867.

During the troubles over the Cherokee Neutral Lands, many of the people of the state lost confidence in Pomeroy, and in 1873 he was defeated for re-election to the senate by John J. Ingalls. It was in connection with this senatorial election that State Senator A. M. York, of Montgomery County, made his sensational charges of bribery against Senator Pomeroy. The charges were investigated by a committee of the United States Senate and also by a joint committee of the Kansas Legislature. On March 3, 1873, a majority of the former committee reported that “the whole transaction, whatever view be taken of it, is the result of a concerted plot to defeat Mr. Pomeroy.” Three days later, the committee of the State Legislature reported Pomeroy “guilty of the crime of bribery, and attempting to corrupt, by offers of money, members of the legislature.” On October 11, 1873, while the political opposition to  Pomeroy was at its height, he was shot by Martin F. Conway in Washington, the bullet entering the right breast, inflicting a painful but not serious wound. Conway claimed that Pomeroy had ruined him and his family.

Pomeroy was arraigned for trial before Judge Morton at Topeka on June 8, 1874, but a change of venue was taken to Osage County. After several delays and continuances, the case was dismissed on March 12, 1875.

After the bribery case against him was dismissed, Pomeroy returned to the East and died at Whitinsville, Massachusetts on  August 27, 1891.