Grounds of the St. Boniface Church by Kathy Alexander.

Scipio is is an extinct town in Anderson County, Kansas. However, it is still home to the beautiful St. Boniface Catholic Church.

The earliest settlers in the Pottawatomie Valley were Catholic priests John Shoemaker and Paul Ponziglione, who dedicated their lives to bringing their faith to the Native Americans of Kansas. They founded several missions in Eastern Kansas during the late 1840s, one of the most prominent of which was near present-day Scipio. In the 1850s, more settlers began settling in the area, many of whom were of German descent. 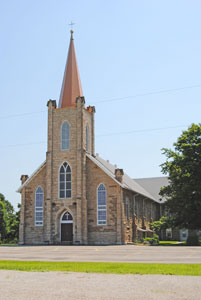 A settlement soon began on the summit of a ridge overlooking the lush Pottawatomie Valley.

Soon the Indians were relocated by the government, and the German Catholic community was without a resident priest or church of its own. In 1856 John Wolken and Henry Feuerborn visited Bishop Miege in Leavenworth, Kansas. Hoping for his help, the two informed the bishop of their need for a priest and their hopes of beginning a parish in this community. The bishop promised to send one of his Jesuit missionaries to Scipio to say mass once a month. But, it wasn’t enough, and Wolken and Feuerborn again asked for a resident priest the following year. Bishop Miege then decided to visit Scipio to assess the situation and was impressed by the people’s faith. In 1858, Father Ivo Schacht was dispatched to Scipio, becoming the first resident priest.

John Wolken donated 20 acres, and soon a new log church and a small residence for Father Schacht were built. The German Catholics christened the church after their homeland’s patron saint: St. Boniface. It would remain the only Catholic church in Anderson County for 25 years.

By the 1870s, the parish had outgrown the small log church, and plans for new accommodations had begun.

In 1873, Father Albert Heimann ordered the construction of a Carmelite Monastery to facilitate the growing number of Carmelite friars at St. Boniface. The site chosen for the monastery building was on higher ground, at the crest of the hill leading down into the Pottawatomie Valley. Father Heimann also ordered the building of Mt. Carmel College directly West of the Monastery. But the number of Catholic clergies worldwide steadily dwindled. The college was the shortest-lived of all these institutions; it lasted a mere two years, closing in 1875.

That year, a one-room parochial school was built. 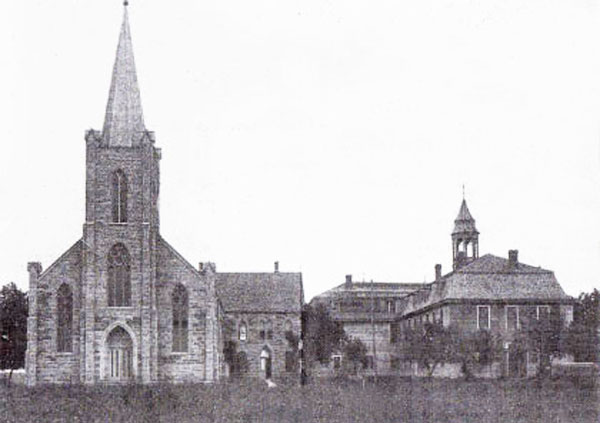 St. Boniface, Scipio, Kansas. The building with the cupola is the college, and the building directly behind it is the monastery.

The cornerstone for the new church was put down in 1881. At this time, the monastery was full of Carmelite friars leading a quiet, peaceful life of prayer. The original 20 acres given to the church by John Wolken had grown to approximately 600 acres. The friars living in the monastery practiced subsistence farming methods on these extensive landholdings, including a ten-acre vineyard. 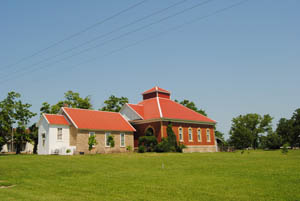 In 1910, the town was located on Atchison, Topeka & Santa Fe Railroad. and had a gas pumping station for Topeka and other towns outside the gas territory. At that time, it had a population of 58.

The original wooden monastery was replaced by a stone structure in the same location, but the Carmelite friars are long gone. Much of the land was sold to help pay for renovations to the newer stone monastery. Today, Carmelite Friars maintain the monastery as a retreat center and minister at St. Boniface and nearby St. Therese Parishes.

The railroad tracks were pulled up in the 1980s, and the railway line was converted into a 51-mile walking/biking trail named the Prairie Spirit Trail.

The old one-room parochial schoolhouse still stands and is used as a photography studio today.

The students in the area are now transported by bus to the consolidated school in Garnett. 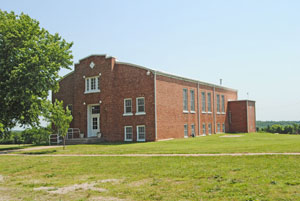 St. Boniface Catholic Church is always open. Visitors are always welcome and encouraged to sign the guest book. Visitors can walk the grounds or take a trip down the lane to the cemetery, just west of the church. The spot where the original log church stood is marked by a beautiful statue depicting the crucifixion. 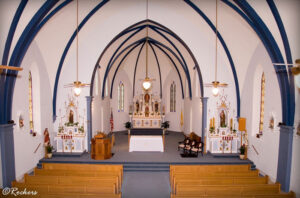