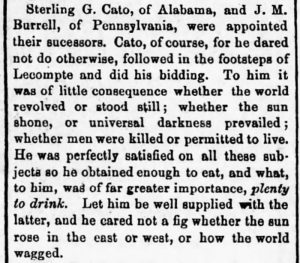 Sterling G. Cato was an Associate Justice of the Territory of Kansas.

An attorney from Alabama, he was appointed on September 13, 1855, to succeed Judge Rush Elmore and served until July 1858, when he was succeeded by Elmore and left the territory. Repeated efforts have been made by the Kansas Historical Society to learn something of Judge Cato’s early life and antecedents but without avail.

Cato was a strong pro-slavery advocate, was in the pro-slavery camp during the Sacking of Lawrence, and many of his decisions were of a bitterly partisan character. He connived with Sheriff Samuel J. Jones of Douglas County and issued writs for the arrest of several prominent members of the Topeka Free-State legislature but released from custody George W. Clarke, who was charged with the murder of Thomas W. Barber, a Free-State man.

On October 20, 1857, he issued a writ commanding Governor Robert Walker to issue certificates of election to several pro-slavery men who claimed to have been elected members of the legislature, but owing to the palpable frauds committed in the election; the governor refused to obey the order of the court.

He was not only notorious for his pro-slavery agenda and activism, he was also a heavy drinker and gambler. In Alabama Cato and his brother Lewis Lewellyn Cato belonged to the influential secessionist group known as the Eufaula Regency.

“It is almost a mockery to call where he presides a court.”

S. S. Prouty, a  of the St. Louis Globe-Democrat correspondent