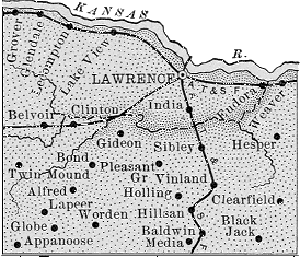 Stony Point, Kansas, in Douglas County, is an extinct settlement area today. First called Hickory Point; this small community was never large enough to have had a post office.

It was located between Signal Hill on the east to almost Brooklyn on the west and stretching along the Narrows.

In 1854 Hickory Point had two blacksmith shops, a harness shop, a hotel, a supply store, and several houses. Hickory Point was important in 1854 because of its location. There were three trails branching north of the Santa Fe Trail to Lawrence.

During the days of “Bleeding Kansas,” a property dispute arose between neighbors, Charles Dow, a Free State man, and Franklin Coleman, a pro-slavery man, which ended in the brutal daylight slaying of Dow by Coleman on November 21, 1855.

Charles W. Dow and his father Ladd were early Kansas settlers who came to Kansas in 1855 from Ohio. When he and Coleman argued over a land dispute, Dow became the first American settler killed in Kansas when Coleman shot him.

The murder of Dow triggered a series of confrontations that later led to the Sacking of Lawrence, the Wakarusa War, the Pottawatomie Massacre, and the Battle of Black Jack.

Maps of 1856 show Hickory Point, but the area changed its name to Stony Point at some point. In 1858, the Stony Point School, a rock one-room building, became one of the first of five schools in Douglas County, District No. 3. The school became the focal point of the community by hosting church services and community activities. 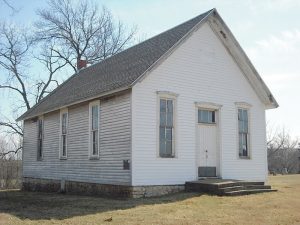 The Stony Point community was strong in its early years, with the church and school being important focal points for the community.

The Stony Point Church was built in 1883 by the Eberhart family and community members. It continued to be used until 1900. The church and cemetery still stand today at North 650 Road between East between 1600 & 1550 Roads, Baldwin City. It was placed on the National Register of Historic Places in 2006.

The one-room school was closed when the district was consolidated in 1947. It no longer stands today.