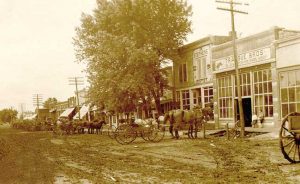 Summerfield, Kansas, located in the northeast part of Marshall County, along the Missouri Pacific Railroad, was named in honor of Elias Summerfield, who was at that time, the superintendent of the railroad. The Summerfield Townsite company was formed in 1888 and purchased 240 acres of land in St. Bridget Township. Soon the original townsite was laid out. Construction on buildings began before the first train arrived in 1889. The building material was hauled from Beattie and Axtell, as were groceries and provisions. The first store building was erected by Heard & McGinty. E. J. Smiley and J. J. McClennan ran a grocery store in the basement of the old Smiley house. An auction sale of town lots was held in February 1889. The post office was established on February 11, 1889.

In the spring of 1890, the town was incorporated with R.G. Cunningham elected as Mayor. The population at that time was about 100.

Among the early businesses were several general mercantile stores, a dry goods store, a pharmacy, grocery store, department store, lumber yard, a milliner, a photographer, two restaurants, a bakery, hardware store, livery barns, barbers, a blacksmith, a physician, a lawyer, a hotel, and a billiard parlor. 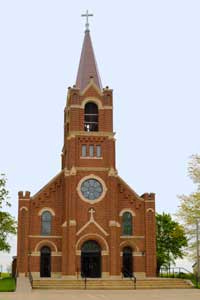 The first elevator for grain was built for O’Neil Brothers, who also owned and operated a hardware and implement store. The second elevator was built in 1893, for the Brunswig Elevator Company. A third elevator was built in 1893, known as the Farmers Elevator. Among those who early located in Summerfield were Dr. J. H. Murphy and Dr. William Johnston. The first carpenters were David Wilson, George Van Allen, James Monroe, and the Webster Brothers. The first draymen were Charles Travelute, George Curtis, and John Nelson.

The first newspaper, the Summerfield Sun, was published by Edward and Harry Felt, sons of Hon. A. J. Felt, of Seneca, former lieutenant-governor of Kansas. The office was in the second story of the I. Jay Nichols building, and the proprietors shared the floor with a hardware and implement dealer. The first story of the building was used as a livery barn and feed stable. It was totally destroyed by fire in 1892. A. A. Gearhart built a livery barn on the same site and a few years later it was burned and Mr. Gearhart lost a number of horses in the fire. Later another livery barn was built on the same site.

The Holy Family Catholic Church was established in Summerfield in 1892 and the beautiful building continues to service parishioners today. 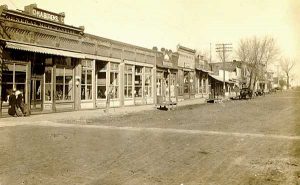 A great fire occurred on June 29, 1894, when almost the entire business portion of the city was reduced to ashes. The fire started in the store building owned by H. H. Lowrey and destroyed every store building north, including two general merchandise stores, variety and book store, drug store, and a hardware store. The loss was near one hundred thousand dollars. The ruins had hardly quit smoking when preparations were begun for larger and more substantial buildings.

In 1910 Summerfield was described as having has banking facilities, a weekly newspaper (the Sun), telegraph and express offices, schools and churches, and an international money order post office with three rural mail routes. That year the population peaked at 554 people. 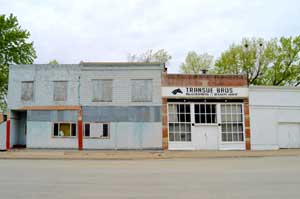 By 1916, the elevators handled about 200,000 bushels of grain and the deposits in the State Bank of Summerfield amounted to $250,000, making the third in the line of deposits among the 27 banks of Marshall county. In 1917, there were 40 prosperous business houses, five miles of sidewalk, well-graded streets, a splendid park, many fine residences, and three churches, with good congregations. Fifty automobiles were owned in the town and was described as being one of the most prosperous and active business centers of northern Kansas.

But, for Summerfield, it had already reached its peak. Over the next decades, its population would gradually decrease and today is called home to an estimated population of 150 people. It is located on Highway 99 at the Kansas– Nebraska border. 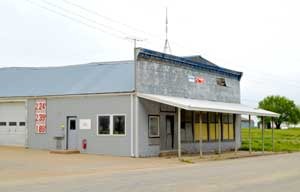