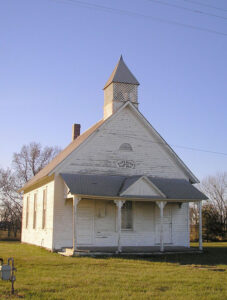 Superior, Kansas was the first town and the county seat in what was then Weller County.

The first to settle this area were Abel Polley, William Tillinghast, Abram Leonard, and E.O. Perin, who selected claims on Dragoon Creek. The last two named erected cabins at what would become Superior.

A Town Company was incorporated by James M. Winchell, Reverend Alonzo Shurtleff, and Professor Daniels, then State Geologist of Wisconsin. James Winchell surveyed the 640-acre townsite and it was soon platted and laid out.

A steam saw and grist mill was erected, and a Presbyterian Church was organized with services held in a log cabin. A road was opened through Superior from Centropolis to Allen, the Dragoon Creek was bridged, shops built, stores opened, and about 30 dwellings erected. Among the buildings, was the large Superior Hotel. Afterward it was also used as a courthouse, schoolhouse, and church.

James Winchell succeeded in introducing Superior as a strong candidate for the capital of Kansas and it was only two votes behind Topeka. He was also elected president of the Wyandotte Constitutional Convention in June 1859, which wrote the Constitution that Kansas still has today.

On March 4, 1859, a post office was established. Weller County was renamed Osage County on March 11, 1859. That year, a tornado hit the town, destroying most of it.

The first term of the district court for Osage County was held on October 14, 1861, at Superior. Previous to this time, the county was attached to Shawnee County for judicial purposes. A county seat election was held in 1861 and Burlingame was the winner. A later election made Lyndon the county seat.

By the early 1880s, the hotel was the only building left and was occupied as a barn and granary.

However, a school site was deeded to School District No. 2 on August 1, 1868, from D.B. Burdick, the first sheriff of Osage County. Soon a county school was built.

By August of 1894, the school needed many repairs and some thought was in an unsafe condition. A bond election was held and it was decided to build a new school. Work began and in the second week of December, the first students attended. The school continued to serve students until the spring of 1950.

Today, the Superior School is all that remains as evidence of the town of Superior. It is located two miles south of Burlingame on U.S. Highway 56, at the northwest corner of the intersection with 189th Street.