From the 1820s to the 1870s, the Santa Fe Trail was one of the most significant land routes in the United States. When the trail was active across Marion County from 1821 to 1866, travelers would make their way from Lost Springs to the southwest about ten miles passing along the edge of what would become Tampa. At that time, the area was referred to as Little Muddy Creek, and pioneers described it as providing buffalo chips, water, and grass. However, it wasn’t an active stop or station along the trail as most wagons made the 17.5 mile trip from Lost Springs to the Cottonwood Crossing in one day because there were no significant streams to cross. Ruts of the trail are still visible northeast of Tampa, and there are two Santa Fe Trail markers near Tampa.

In 1887, the Chicago, Kansas, and Nebraska Railway built their tracks from Herington through Tampa to Pratt. The same year, the Golden Belt Town Company filed a plat for the town. The name is said to have been suggested by a railroad engineer. A post office was established in Tampa on April 17, 1888.

Tampa grew slowly and was incorporated as a city in 1908. By 1910, the railroad was operated by the Chicago and Rock Island Railroad. At that time, it had a bank, telegraph and express offices, a money order post office with two rural routes, several retail stores representing all merchandise lines, and a population of 256. 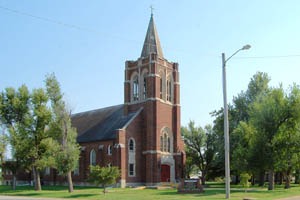 In 1930  the beautiful Holy Redeemer Catholic Church was built, replacing an older church built in 1901. Unfortunately, the old church burned in 1935. Today the church is used for weddings, funerals, and monthly Mass.

In 1958, the Centre School District was established to serve the many small towns in the area that are primarily involved in farming and ranching. This consolidated the Lincolnville, Burdick, Lost Springs, and Ramona school districts. The Tampa school district was added in 1969. The K-12 building is located on a 25-acre tract off Hwy 77, two miles north of Lincolnville.

After the Tampa High School, whose mascot was Tampa Tigers, the school was demolished. 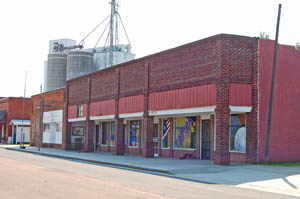 It is located between Durham and Ramona, about 20 miles northwest of Marion.