Twin Mound is an extinct town in western Douglas County, Kansas. It was named for two natural mounds that rise gently in the area.

The town was founded by Henry Hiatt, an Indiana native who arrived with his wife, five children, and widowed mother-in-law in Kansas Territory in April 1856. First settling in Bloomington (now Clinton), Hiatt operated a sawmill with two other men.

In August 1856, the supply route to Lawrence was cut off and the townspeople were forced to travel to Lecompton which was strongly pro-slavery. Henry Hiatt and several other people were taken prisoner and 50 pro-slavery ruffians began marching to Bloomington. A team of 400 or 800 men then marched toward Lecompton and although a confrontation was avoided it resulted in the looting and burning of Colonel Henry T. Titus’ home (known as the Battle of Fort Titus).

Hiatt moved on within a year, setting about seven miles to the southwest. Before moving, Hiatt salvaged some lumber from the sawmill to build a new home. The house was two stories when it was complete, and the interior was trimmed in walnut. On his property, Henry planted several types of trees. 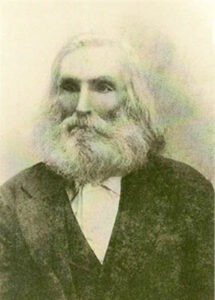 In 1858 Henry Hiatt constructed a stone grist mill about a quarter of a mile northeast of his house. Believed to be the second mill in the state, it was equipped with stones cut from Vermont granite. The mill structure was large enough to accommodate a general store where Hiatt sold groceries, dry goods, and hardware. He also bought butter and hides from area farmers and hauled them to Lawrence for marketing. When a post office was established at Twin Mound on June 30, 1858, it was located in the mill, and Hiatt became the first postmaster.

The Hiatt home became a relay station for the Lawrence to Emporia stagecoach line. Here the stage would get a fresh team of horses, and the passengers would receive water and refreshments.

Before the Civil War, the Hiatt home was also a stop for the Underground Railroad. Henry, an ardent abolitionist, would then transport the former slaves to Topeka, Kansas, in a covered wagon. Their trip would eventually end in Canada.

Unfortunately, Hiatt’s wife, Frances, died on April 19, 1859, at the age of just 37. At the time of her death, a young friend from Indiana named  Abigail Ann Mead was staying with them. Abigail stayed to help Hiatt with his five children and aging mother-in-law. In 1862 Henry and Abigail married and she would eventually have six more children. 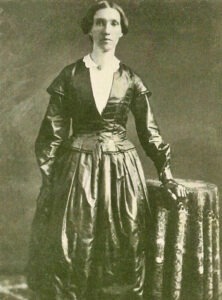 After the death of his wife, Henry established a cemetery about one-half mile northwest of their home. Here is where Frances and many family members are buried, as well many other early area pioneers. The small cemetery is still active today.

He also continued to operate the grist mill and farmed.

On May 9, 1863, Henry was appointed trustee for the town of Twin Mound on 160 acres. The town was soon platted, and he began to sell blocks to prospective citizens.

Henry Hiatt also had more ambitious plans for Twin Mound. On the townsite plat, an area adjoining the school ground was designated as College Square. Hiatt wanted to establish a school of higher learning and set about trying to interest potential Boston, Massachusetts investors in buying shares to finance the project. The college was to be called the Twin Mounds Harmonic College, a ”new and true system of education.” A circular containing the Articles of the Twin Mounds Harmonic College Association was printed and sent back East to solicit funds. An “Appeal” accompanying the document explained that the term “Harmonic” referred not to music but to synchronize an educated mind with a healthy body. Hoping also to attract more settlers, Hiatt wrote:

“Who that have children to educate will help here endow a College where they may be educated? Who that wish to educate themselves will first take stock in the College and then come here and live on the acres they will thereby secure and thus enjoy the benefits of the Institution they helped build… The location of the college is all that could be asked. Twin Mounds is in the County of Douglas, and Territory of Kansas, so named for two natural mounds near each other, can hardly be surpassed either for beauty or healthiness by any locality in the West. Add to this, it is in the heart of a rapidly settling country directly on a great stage route (soon in all probability, to be superseded by a Railroad) so that even in a pecuniary scheme, the college can scarcely fail to prove a profitable investment.”

He planned that the college would be open to all races, creeds, and both sexes. In a strong emotional appeal, he called out to the “friend of the Indian,” “the friend of Woman,” and the “enemy of slavery” to support his project. But his ambition was never realized. This may have been due to his lack of experience, competition against the stronger forces seeking support for a university at Lawrence, and probably partly to his untraditional views. 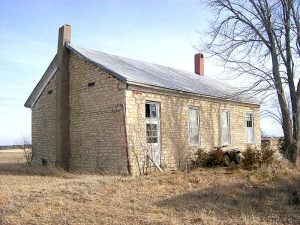 In January 1880, Hiatt’s grist mill, store, and post office were destroyed by fire. Two granite millstones, the only items salvaged from the fire, were placed in Hiatt’s yard. Following the fire, Hiatt erected another store across the road and east of the family home. The post office then continued to operate in that building.
That same year, the first schoolhouse was replaced by a more substantial stone building that continues to stand today.

In 1891 a Missourian by the name of Carpenter became postmaster and opened a store about 100 yards east of the old mill site. Two years later, he sold his business to J. W. Banker, also from Missouri, who constructed a more substantial building.

Anticipating his death well before the event, Hiatt carved his own coffin out of a large, sturdy log. He then stored the coffin in the house for safekeeping. On February 27, 1900, Henry died at the age of 84. He was buried his homemade coffin in Twin Mound Cemetery and his grave was marked with the granite millstones from his gristmill.

In 1902 the Silas Hindman family, who owned a grocery store in Augusta, Kansas, traded their business for a 320-acre farm at Twin Mound. They also constructed a new frame grocery store across the road from the mill site. Hindman operated the store and acted as postmaster until he died in 1903. On January 31, 1903, the post office officially closed and never reopened. Five years later, the family sold the farm and moved to Lawrence. 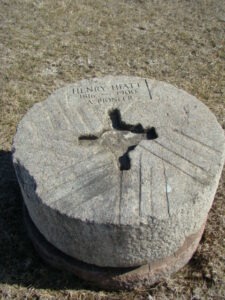 The first church in the community was built in 1909. The one-room frame Methodist church was paid for by a fund drive and built by donated labor. Since the church did not have a resident minister, it was served by ministers from Richland, Overbrook, Clinton, and other nearby towns. The church was active until 1929, after which time it was used as a church only occasionally, sometimes by other denominations. However, the Rural Bible Crusade conducted summer Bible school classes in the schoolhouse from 1952 to 1965. On February 2, 1970, the church was destroyed by a grass fire.

In 1910, Twin Mound received its mail from Richland, the nearest railroad station, and its population was just 33.

After Henry Hiatt’s death, his widow, Abigale, and his son Orel remained in the home. Abigale died in 1928, and Orel acquired the property. Orel, who was also called Ollie, was a free-thinking man like his father, but he also had many peculiarities. He was also an unhappy man. After avidly studying Eastern cultures, astronomy, and geology and spending two years traveling overseas, he returned to Twin Mound. Embracing Hindu and Buddhist philosophies, his peculiarities often made him a scapegoat for various unexplained misdeeds in the area. After briefly spending some time in a mental institution, he became very bitter and often lashed out at those he saw as enemies by printing dissertations against them. Living in the old family home, he became a recluse. The Hiatt house was destroyed by fire in 1938, and Orel moved in with his younger brother, Clyde, where he remained until he died in 1941.

In the meantime, the Twin Mound School continued to serve students until 1966, when it had an enrollment of only seven students. It was then consolidated with three other communities. The school is thought to have been the last rural Douglas County school to consolidate. Afterward, the building was used by the Twin Mound Grange for several years.

Today, the old townsite comprises just a few farms, the one-room schoolhouse, and the cemetery.