Vesper, Kansas is an extinct town in Lincoln County. However, it still has a small population and a few old homes and buildings. 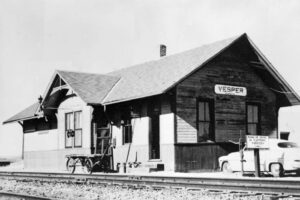 William B. Cheney was the first settler. The Middlekauff family was the second, and they came when there was only one house between Lincoln and Vesper. Other settlers were A.W. Lewis, H.S. Steele, Mr. Schofield, Troup Hickey, John Tool, and William Baird.

A post office was established on April 22, 1872, and for several years it was moved around the neighborhood from house to house.

The first school was taught at H.S. Steele’s. A man by the name of Shoemaker kept the first shoe store. Mr. Baird, who was a carpenter and architect, built the first wagon ever made in the county in 1873 for Martin Hendrichson. He also built the first windmill for Mr. Davis. Simon Bough built a store building and kept a stock of merchandise. Wick & Jepsen built a hardware store.

The Vesper Presbyterian Church was organized on September 3, 1876, by Dr. Timothy Hill and Reverend H.C. Bradbury, two miles west of Vesper, in an old school building.

When the Union Pacific Railroad was built in 1886, the town was moved to the station, and the town grew up around it.

The Presbyterian Church was built in Vesper in 1901, and the townsite was platted into lots in 1905.

In 1910, it Vesper had a bank, two grain elevators, a lumber yard, a blacksmith shop, a hotel, a restaurant, a meat market, a hardware store, a general store, and two churches.. It also boasted telegraph and express offices, a money order post office with two rural routes, and a population of 100. 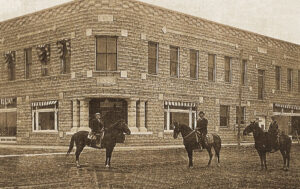 Vesper prospered in the following decades but, in time, would begin to decline.

The community built a consolidated school in 1914. The same year, the Middlekauff State Bank opened in a large stone building.

Unfortunately, the Saline River was prone to flooding, with one occurring in 1928. Just a few years later, in 1935, the business district suffered a devastating fire that destroyed the barber shop, a stone building that once housed the old Farmer’s Store, state bank, and a drug store, and the deserted hardware store and deserted lumberyard.

The town was also a victim of the terrible Black Friday Flood of 1951. This flood still stands as the single greatest day of flood destruction in Kansas. The Kansas River was so full that it forced the waters in its tributary, the Big Blue River, to run backward. 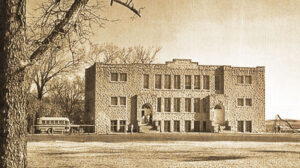 Consolidated school in Vesper, Kansas, about 1950.

In the 1950s and 1960s, both the grade school and the high school closed. The post office closed on December 30, 1966. Area children attend the Sylvan-Lucas School District today. The consolidated school was demolished in 1970.

In 1987, Vesper suffered yet another flood.

Services were held in the Presbyterian Church until January 2008. Today, the building is privately owned and is available for community events.

The town still has several homes, a small population, the old church, and a few commercial buildings.

It is six miles west of Lincoln and a half mile south of Highway 18. 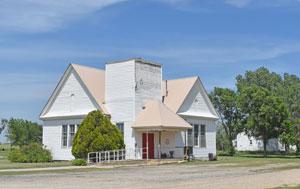 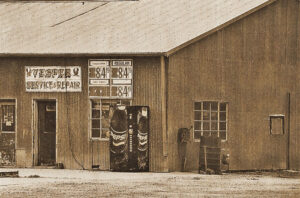 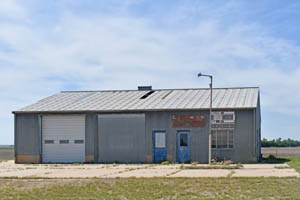