An early settlement of Douglas County, Kansas, Vinland is situated along the Atchison, Topeka, & Santa Fe Railroad about seven miles south of Lawrence. 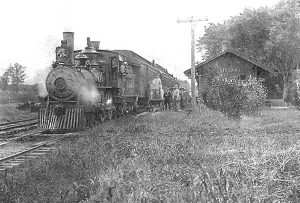 The first settlers came in 1854, among them Jacob Branson, Charles W. Dow, Franklin N. Coleman, W. E. Barnes, George Cutler,  F.B. Varnum, William White, Josiah Hargous, Harrison W. Buckley, and several others. They were mostly abolitionists spurred on by the Kansas-Nebraska Act settling in Kansas to make it a Free-State. Renowned Jayhawker Silas Soule was also among the first settlers. Like much of eastern Kansas, Vinland struggled in the Bleeding Kansas period to keep the land free from slavery, and at least one man was killed in the Battle of Black Jack in June 1856.

The town was first named Vineland due to it being the home of William Barnes’ orchards and nursery and all the new settlers quickly planted fruit trees and gardens. Due to a clerical error that omitted the “e,” it became known as Vinland. Barnes’s old storage facility still stands and is considered the oldest barn in Douglas County. 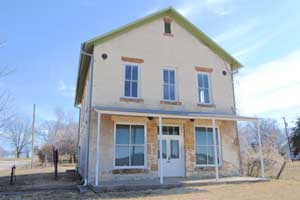 In 1857 a sawmill was erected by N.C. Cradit & Co. on Coal Creek. The first school was opened in a small building in the fall of 1858, taught by A.W. Smith. The town was of some importance during the years 1857-58 but did not grow much. It received a post office in 1868 with George Cuter appointed as the first postmaster. On July 1, 1870, Russell & Davis opened the first store. In 1874, a cheese factory was established, and in 1878, the Presbyterian Church was built.

In the early 1870s, a cheese factory was established and in 1878 the Presbyterian Church was erected.

By 1910, the town had become a supply and shipping point for the surrounding agricultural district, with a money order post office, express and telegraph facilities, and a population of 75.

From 1914 to 1916, Dr. James C. Naismith, inventor of the game of basketball, served as minister of the Presbyterian Church. At that time, he was also serving as a chaplain and physical education professor at the University of Kansas in nearby Lawrence. 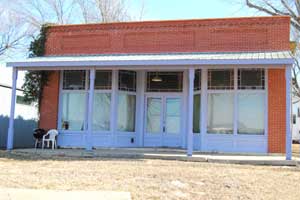 Vinland’s population peaked in the 1920s, at which time it boasted three churches, two stores, a grain elevator, the Grange Hall, a bank, the train depot, a service station, the cheese factory, a few other businesses, and several dwellings. It began to decline along with rail passenger service, the Great Depression of the 1930s, and the consolidation of schools.

By 1954, the town had dwindled to such a degree that its post office was closed.

Today the hamlet is part of the Lawrence Metropolitan Statistical Area and those who live in the vicinity are primarily running agricultural and dairy farms. Its tiny downtown consists of about a dozen homes, many of which are a century old, a small airfield, an elementary school, the Grange Hall, and the Coal Creek Library, which is one of the oldest libraries west of the Mississippi River, operating since 1859. 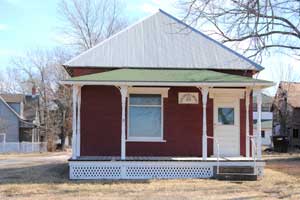