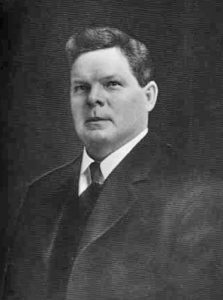 “Uncle” Walt Mason was a poet, humorist, and journalist in Kansas.

Mason was born in Columbus, Ontario, Canada on May 4, 1862, a son of John and Lydia S. Campbell Mason. He was self-educated, and in 1880 came to the United States to engage in newspaper work. From 1885 to 1887 he was employed on the Atchison Globe, in Kansas and later was connected with the Nebraska State Journal published at Lincoln. In 1893 he became a writer on the Washington Evening News and the same year, married Ella Foss of Wooster, Ohio on February 15, 1893.

Beginning in 1907, he was associated with William Allen White in the publication of the Emporia Gazette. Mr. Mason was also the author of Rhymes of the Range and Uncle Walt, and a Calendar. His “Poetic Philosophy” was published in a number of newspapers throughout the country. He died in 1939.