Waterloo, Kansas, a tiny hamlet of Kingman County, is located in Galesburg Township, ten miles northeast of Kingman. Though it is officially an “extinct” town because it no longer has a post office, it still displays several homes, buildings, and a small population. 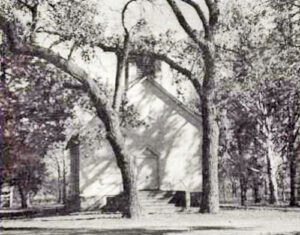 The first settler in Galesburg Township was A.B. Torrent, who made his home on a small creek in 1875. He was soon followed by the Endicott family and others from Illinois who escaped flooding in their area. The settlement was first called Stanford, and a post office opened on March 5, 1878, with Simon F. Utley as the postmaster. He also operated a stage station out of his dugout home.

The first religious group, the Pleasant Valley Presbyterians, was formed on February 25, 1878, with services initially held in member homes.

By this time, the treeless, open prairie quickly became populated and was broken up for farming. A problem across much of Kansas was that many settlers of these open plains were driven away by the strong winds that swept across the land. Once the sod was plowed up, the winds carried clouds of choking dust that sent many returning to the east. However, in 1879, L.M. Smith, a nurseryman from Illinois, arrived, and with the help of local residents, he planted 12,000 trees. With trees and hardy shrubs., the Kansas landscape would forever change. Soon, Tree vendors began to pop up all over Kansas.

On September 28, 1981, the town and post office name changed to Waterloo. 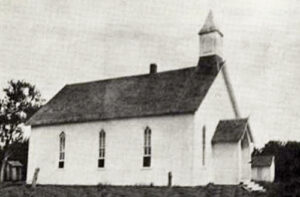 The first St. Louis Catholic Church was built in 1882. Unfortunately, it was blown away before it could be dedicated, and another building was erected in its place.

Though Waterloo hoped for a railroad through the community, it was instead built to Murdock, Kansas, another small community five miles to the south, in 1883.

In 1885, Waterloo was a well-established community, boasting a school house, two churches, a hotel, a plasterer, a livestock dealer, several other commercial buildings, and a population of 80.

In 1886, the Lebanon Methodist church was built on land purchased from J.P. Cawthon.

“The town of Waterloo is a beautiful little villa situated on the eastern bank of Smoot’s Creek, a rapid stream which runs the year round. The Town is surrounded by some of the most productive farms in the state… There is no part of the state of Kansas which enjoys a better water privilege on soil as rich and deep as does the vicinity of Waterloo.”— Kingman Courier, April 19, 1888 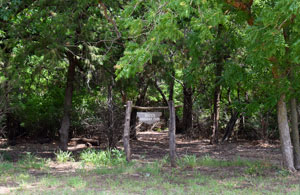 By 1890, John Walter Riggs moved his family to Waterloo. Riggs, a school teacher from Indiana, had first settled in nearby Kingman in 1885. Missing the trees of Indiana, he garnered an interest in the tree nursery movement that L.M. Smith began. He soon began to explore botany full-time, obtaining shade and fruit trees to test their adaptability to the Kansas Plains.

In 1887, John began the commercial nursery operations of growing, buying, and selling trees to neighbors and the public. Though many nurseries had been established, most lacked the botanical experience and scientific approach required to succeed in the business. This is what would make John Riggs one of the few successful nurserymen.

The Presbyterians constructed a church in 1892. Despite being home to three denominations, Waterloo has only one cemetery, located in the northeastern part of town.

During the 1890s, Riggs spent much time traveling through the south and southwestern parts of the country to collect plant samples for his Waterloo tree station. Exploring and experimenting with many species, including fruit and nut trees, exotic species, and various saplings and bushes, he found that coniferous trees (fir, pine, cedar, etc.) would survive well in Kansas. With notable success, he planted several varieties of oak, maple, birch, elm, mulberry, locust, sycamore, pine, juniper, arborvitae, and fruit trees. Soon, area farms and home sites were surrounded by quickly growing trees. 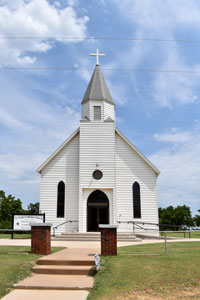 By the turn of the century, the U. S Department of Agriculture learned of John’s successful growing of tree varieties on the Kansas prairie. The department sent representatives to him to learn about his operations, knowledge of horticulture, and trees that he was successfully growing. John Riggs was then commissioned as an experimenter for the Department of Agriculture with the right to import trees from all over the United States as well as from foreign countries with which the U. S. had trade relations.

The 20th century brought about many changes for the town of Waterloo. The population was declining, but in 1900, it still had a general store, blacksmith shop, grocery store, and a public school.

Riggs began his Arboretum in Waterloo in 1901. Covering ten acres, John originally planted a collection of trees, including cedars of Lebanon, Olive of Palestine, sequoia, magnolia, plants from Australia, and the lotus from the Nile River. He succeeded in making numerous rare plants grow. That year, the arboretum was officially declared a government experimental forestry station. In 1901, the Catholics needed more room and built the present-day church for about $3,500.

In 1903, the first Catholic parochial school opened. The school building was created from the remodeled old church building. This Sisters of the Precious Blood Order came to teach. The first Sisters’ Residence was built directly west of the school building facing Grove Street. In 1905, a rectory was built for the priest.

In 1910, a new, one-room parochial school was built of cement blocks. 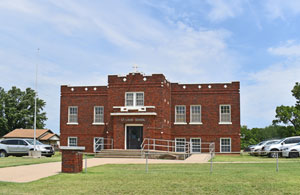 In 1924 a new St. Louis Catholic School was built, with classes still taught by the Sisters of the Sorrowful Mother. The structure was built by church members with bricks and all other materials hauled from Murdock by team and wagon. The sand was hauled from the Smoots Creek. Each family was asked to pledge $300, but many families gave much more, and by the time the building was completed, the money had been raised, and all debts paid. After much hard work, the modern two-story brick building was completed. On August 25, 1924, the building was dedicated.

The Methodist Church closed in 1929, and the building was moved to Abbeyville.

The Riggs Arboretum continued to be successful for many more years, bringing a constant string of visitors to the tiny community of Waterloo. However, John Riggs tragically died on January 23, 1930, in a house fire caused by a coal oil explosion. The fire also destroyed all records and experimental notes concerning the nursery.

The Pleasant Valley Presbyterian was used until December 1959, when the church and its land were sold due to lack of membership.

The Catholic school served students until it closed in 1966. Since the school’s closing, parish priests, parishioner volunteers, and sisters who could be engaged to teach summer school sessions or on Saturdays have provided religious instruction for the children. In 1967 the parish priest changed his residence to the rectory at St. Rose Parish in Mount Vernon. The two parishes have continued to share the same pastor since that time.

Today, Waterloo still has a few homes, one of which was once the public school. The Catholic church still serves a small congregation, and the Catholic school is still used by the community for various activities. The Riggs Arboretum is now an overgrown forest with many trees that are over 100 feet tall. It is owned by Riggs descendants and can be visited with permission. It is proclaimed to be the oldest arboretum west of the Mississippi River. 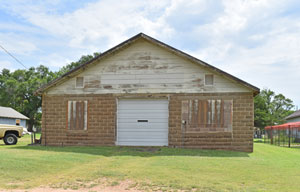