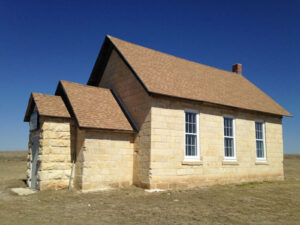 Wilcox, Kansas was a small rural settlement located in central Trego County. It was named for William Willcox, the first settler and postmaster. A post office was established on April 30, 1879, on land provided by William K. Willcox. The second ‘L” was later dropped from the original spelling of Willcox.

The early farming challenges and the arrival of the Union Pacific Railroad, which replaced the Butterfield Overland Despatch and Smoky Hill Trails, may have contributed to the short-lived settlement of Wilcox. The Wilcox post office closed on May 15, 1896.

However, there were still children in the area that needed a school. District 29 was organized and a stone schoolhouse was built in 1886. An acre of land was given to the district by Caroline M. Manly and her husband on October 4, 1886, for the construction of a school. Due to the scarcity of trees, the settlers used Niobrara limestone located on the south side of the Smoky Hill River to build the school. The quarried stone was hauled to the building site one-half mile north of the river over low-water bridges and natural fords using horse-drawn wagons. The Wilcox School was completed that year. Bernice Yetter of Ogallah was the first teacher during a three-month term

Typical of early one-room country schoolhouses, the building is a simple rectangular form with a gable roof. There are two entry bays on the front of the building, a chimney on the rear, and three windows on each of the two sides. The interior of the school also reflects the style and layout of traditional one-room country schools with plaster walls, wood wainscoting, and a ceiling of pressed metal. A stove is located toward the back of the school and the entry foyer on the north end was used as a cloakroom with coat hooks still in place. There was no well at the school and pupils carried a gallon syrup pail of water to school. Later, water was reportedly brought to the school from the Jackson place, located north of the school.

The school served all children of families in the area for grades 1-8. Students desiring additional schooling attended high school in Ransom or WaKeeney.

District 29 was consolidated with other rural districts in 1947 and the Wilcox School closed in 1949.

“Wilcox school was a good school for learning and playing… There were spelling matches and arithmetic matches at the blackboard. Individual grade classes were called up to sit on a bench near the teacher’s desk for reading or arithmetic, while other students studied at their desks.”  — Rosie Mai Kvern, a student of Wilcox during the 1946-47 term 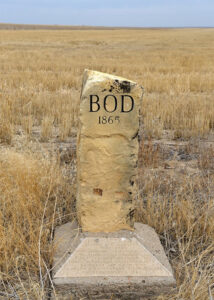 In addition to its primary role of education, Wilcox School served as the hub of the community. Sunday School was organized and held at the school for many years and ministers from Ransom and WaKeeney came and held regular services. Meetings and social activities were also organized by local residents and the building served as the Township voting hall.

After the schoolhouse closed, it was purchased by the Hi-Plains Gravel Grinders Motorcycle Club for use as a clubhouse. Today it is owned by the City of WaKeeney. In May 2006, the one-room schoolhouse was listed on the National Register of Historic Places and has been preserved.

Today, the school is the only thing left of the old town of Wilcox.

It is located on the Smoky Hill Scenic Byway 14.8 miles south of WaKeeney on the east side of Highway 283 between mile markers 131 and 130. The school stands on a small hillside overlooking the Smoky Hill River Valley. A gravel road on the south side of the site provides access to the school. There is no playground equipment or other structures on the site.