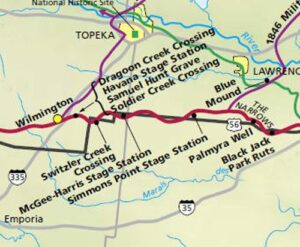 Willow Springs, Kansas in Douglas County, was once a popular campsite on the Santa Fe Trail.

The Indian Removal Act of 1830 set aside the land that is now Douglas County as an Indian Territory. The passage of the Kansas-Nebraska Act in 1854 opened the land to white settlement. The General Land Office completed its survey of the Willow Springs area in 1856 and included the boundary lines for the town of Willow Springs on its plat.

On February 26, 1855, a post office known as Davis, with Thomas Mockbee as postmaster, was established at the present site of Willow Springs. It was one of the earliest post offices in Kansas Territory.

As travelers and freighters approached Willow Springs on the west side of Douglas County, they went through the muddy “Narrows.”

“On reaching the ‘The Narrows’… it is quite common for a wagon to sink up to the hubs in mud, while the surface of the soil all around would appear perfectly dry and smooth.”

This was probably due to the shallow subsurface water flows which feed the springs in parts of Douglas County.

In 1858 a band of pro-slavery border ruffians under Colonel Henry K. Pate stopped at Willow Springs, setting the buildings on fire and robbing the people of their horses, money, and guns. Four months later, in August 1858, Free State men retaliated against a group of pro-slavery border ruffians in a blacksmith shop along the trail back at Hickory Point, and in the gunfire three free-state men were wounded. One of them was just 16 years old. 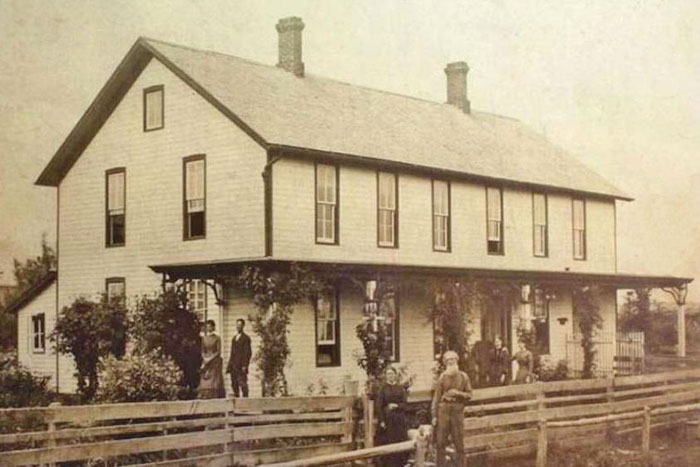 In 1860, the town site was purchased by Edwin H. Van Hoesen who had built a hotel near the Santa Fe Trail in 1857.  The hotel was probably an attempt to attract the railroad that was under construction in northeast Kansas.

On July 23, 1861, Van Hoesen became the postmaster and the name was changed to Willow Springs. His hotel served as a stop along the trail, a local store, a post office, and his home.

In 1866 when the Kansas Pacific Railroad reached Junction City, the eastern terminus of the Santa Fe Trail shifted to that city. Further disappointing VanHoesen, in 1867, the Leavenworth, Lawrence, and Galveston Railroad line came through Douglas County four miles east of Willow Springs and the St. Louis Southwestern Railway went through Overbrook, in Osage County, ten miles to the west. Over the next ten years, passage on the Santa Fe Trail in Douglas County was reduced to local traffic. 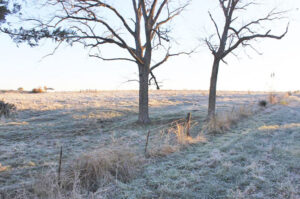 In addition to the hotel, the old German Brethren Church, still standing south of Van Hoesen’s barn, and the Willow Springs School formed the nucleus of a “country corner” that served as an important socializing center for the scattered population of Willow Springs.

By the early 20th century, a small cluster of businesses was located in Willow Springs along East 1100 Road; although, the hotel burned in 1907. In 1906, the Daughters of the American Revolution (DAR) placed a marker at the site commemorating the Santa Fe Trail.

Today, the Willow Springs Santa Fe Trail Segment and DAR Marker are listed on the National Register of Historic Places. It is located a little over six miles northwest of Baldwin City, near the former town site of Willow Springs. The trail segment contains at least one swale, that is 45 feet wide. The Willow Springs DAR marker sits 750 feet off to the west of the creek, on the west side of East 1100 Road at the T-intersection with North 550 Road.