The town of Winifred in Marshall County, Kansas was founded in 1907 and platted and laid out by Gottfried Keller on his farm. It was situated on the Topeka and Marysville branch of the Union Pacific Railroad, eleven miles southwest of Marysville.

Before Winifred was established, another townsite called Sylvan was established in 1857 and received a post office in August 1857. In 1858 it was made the county seat of Marshall County. The prime mover in this affair was T. S. Vaile, a member of the Free-State Kansas Territorial Legislature from Marshall County. Marysville at that time was reputedly a pro-slavery town, and Vaile had an act passed removing the county seat to Sylvan. A body of men representing the Nebraska Town Company came to Sylvan at that time with 24 oxen and wagons loaded with lumber to build the town. They also brought some mercantile goods which they sold in a tent. However, no buildings were erected. In September 1858 the post office closed. One can surmise that the post office was held in someone’s home since no buildings were built in the new town. The only official business transacted at the new county seat was the canvassing of the vote of 1859. Because there were no buildings at Sylvan, the county commissioners held their session in the house of George D. Swearingen, a mile distant. The vote of the “people” returned the county seat status to Marysville. Afterward, Sylvan was abandoned until the new town of Winifred was founded. 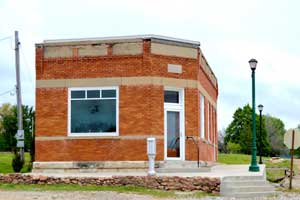 After Sylvan was abandoned as the county seat, the Nebraska Town Company left their lumber on the ground and departed. The lumber was at once confiscated. No direct charge was made as to who took it, but as a certain self-styled county seat was badly in need of lumber, that useful building material may have found its way there. For 50 years the name of Sylvan was but a memory until 1909 when the Union Pacific Railroad was extended from Topeka to Marysville, and on the site selected for Sylvan was built the town of Winifred.

One of the first pioneers of Winifred was Isaac Walker and his family who had settled the land near where Winifred would be established. The new town was called Winifred for Mrs. Isaac Walker

The Winifred State Bank was charted in 1909. However, the town grew slowly and did not receive a post office until February 1910. The schoolhouse was built and opened in 1911 at a cost of $2500. The two-room school initially had two teachers providing instruction from the first grade to the second year of high school. The Winifred Baptist Church was dedicated in September 1911. The first store was operated by S.C.M. Smith.

In 1916, the Winifred Grain Company shipped 100,000 bushels of corn and 150,000 bushels of wheat from the rich farming area to Kansas City and to various points in Iowa. The Farmers Union Elevator also did the same amount of business. A general merchandise store owned by A. F. Yaussi opened in April 1916.

By 1917, the town boasted the Winifred State Bank, a hardware store, two grain elevators, a garage, a general merchandise store, a barbershop, a restaurant, a lumber company, and about 75 people.

Today, Winifred is a pretty much a ghost town. Its post office closed on January 1, 1986. All that is left is the old bank building, grain elevators, a few scattered homes, and the Winifred Baptist Church, which still holds services. 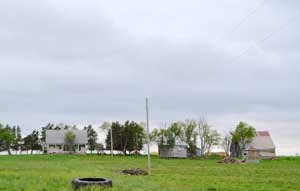 An old farm at Winifred, Kansas by Kathy Weiser-Alexander.