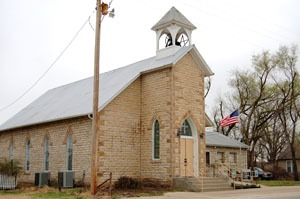 The unincorporated community of Zeandale, Kansas, is a ghost town near the Kansas River in southeast Riley County.

With the help of the New England Emigrant Aid Company, this settlement got its start in 1854 when John M. McCormick, C. P. McDonald, and William Wiley located their claims in the area. More claims were made the next year, including one by Josiah H. Pillsbury, who suggested the name for the settlement. Zeandale means “Corn Valley,” which was contrived from the Greek word for corn, “zea” and the English word for valley, “dale.”

Soon after the town was officially laid out, it gained a post office on June 29, 1857, with D.M. Adams serving as the postmaster. The office was kept in the home of Josiah Pillsbury.

A Congregational Church was organized in 1858, and a church building began to be erected, but it was never completed. Instead, the people worshipped under some trees at Pillsbury Crossing. 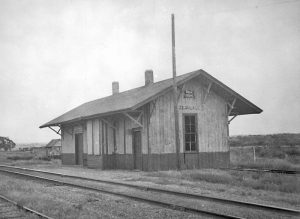 The Chicago, Rock Island, & Pacific Railroad once ran through Zeandale, Kansas but the tracks are gone today.

Mrs. M. Pillsbury taught private school at her home in 1858. The next year a public school was taught in a small building on the farm of Mr. Abner Allen. In 1862 the first schoolhouse was built of hewn logs in a hexagonal shape.

Despite the natural beauty of the area and its rich farmland, the town grew slowly, and on March 16, 1868, its post office closed.

By 1880, the settlement still only had a population of 26 residents. However, four years later, its post office was reopened on August 27, 1884.

A Christian Church was established in 1896 that was originally associated with the Stone-Campbell Restoration Movement.

At some point, the Chicago, Rock Island & Pacific Railroad came through Zeandale, but even that didn’t help the small town grow much. By 1910, it had a population of 75. 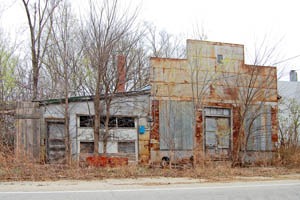 An old business building in Zeandale, Kansas by Kathy Alexander.

Zeandale is located about seven miles east of Manhattan at the intersection of Tabor Valley Road and K-18 highway.